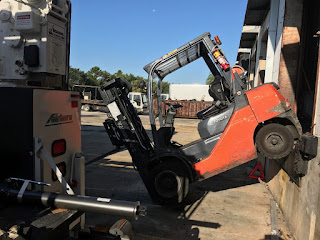 Bruce Bussing is one of the finest supervisors I have ever been privileged to work with.

Bruce is fond of telling a story about the time a Committeeman (Union Steward) approached him late one afternoon and made an impassioned plea to expunge the record of an individual Bruce had fired. Expunging his record was the first step toward clearing the way to have the fired employee hired back into the firm.

The next morning, Bruce told the Committeeman, "I don't like to make decisions in a hurry. Whaddya say we meet at Bob Evans for dinner on Saturday night, you, me and Smedley and we will discuss this like grown men."

That was far more than the Committeeman expected and he quickly agreed.

On the appointed day and time the Committeeman and Smedley found Bruce at the local Bob Evans restaurant. Bruce was accompanied by a  couple in their early twenties with a toddler. The Committeeman assumed Bruce brought his son for some sick, twisted reason.

After eating, the Committeeman launched into his pitch. Smedley had been on the wagon for six months and had a clean record where he had been working. Surely six months was long enough to establish Smedley had turned over a new leaf.

You see, the backstory was that Smedley had a mishap with a fork-truck in the plant and it was determined that he was drunk. There are not a lot of things that will get you summarily fired in a union environment, but driving power equipment while intoxicated was one of them. The union's dues-paying membership was dwindling and they didn't want drunks to hurry the decline.

Bruce listened impassively. The young couple seemed nervous. The woman was anxiously twisting her napkin the entire time the Committeeman was talking.

"Yup. I talked to a couple of his buddies and they told me where he was working. I called them to see how he was doing and the dock-master told me Smedley drove a 12,000 pound fork-truck off the end of the shipping dock."

"Before we go any farther, I want to introduce you to Roy Ingraham and his wife. They are fine people" Bruce said.

The Committeeman nodded. "I am sure they are."

Bruce's train-of-thought was opaque to the Committeeman. It seemed like a terrible breach of professionalism to bring an unrelated employee to a meeting where the discipline of another employee was being discussed.

"Roy is the model employee. He is never late. He leaves his work-cell spick-and-span. Never fights with the other employees."

"Of course you know Smedley because you are old friends. Seems like he needs your help every three months or so."

"So I can understand you not knowing Roy...seeing how he is on a different shift and never gets into trouble."

"So why is he HERE?" the Committeeman asked.

"So I want you to look at Roy...who has been paying his Union dues for the last five months...look at his wife and his child and you tell them that Smedley is more deserving of Roy's job than he is. I want YOU to fire them."

The Committeeman slapped a $20 bill on the table to pay for his portion of the bill.

Smedley asked "Who is paying for mine?"

The Committeeman snarled "GFYS" at Smedley and stalked out.

Bruce looked over at Roy and his wife and said. "Thanks for coming. Looks like you still have your job."

If you have a set number of positions on your life-boat and have penciled in the names of the people who will fill them, then THEY will take out the trash after it is made clear that letting others in means that they gave away their seat.

The key to making this work is to get the designated passengers aboard as quickly as possible.

Zero-sum-game can be your friend.