The Jokes Write Themselves 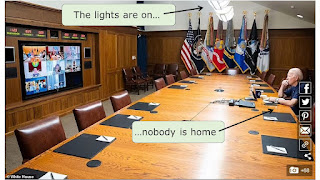 The media is already running headlines warning us that increased terrorism (carefully omitting the word "Islamic") is likely to be observed on the Twentieth Anniversary of 9/11.

No mention is made of the bumbling ineptitude of the United States Executive Branch. For those who require a refresher in Civics, the Intelligence branches and  the Military report to the Executive Branch. Such bumbling cannot help but further embolden the terrorists.