Warning:  This will not be much of a post.

I paid bills this morning.  That made me grumpy.

Then I drove to Grand Rapids to pick up Belladonna's mattress and box springs.

I heard this song on the way west.

A short time later I got to watch a white SUV spin-out and hit the concrete Jersey barriers as he/she was coming up to speed after entering westbound M-6 at mile marker 15.  The right front and left rear quarters got smoked.

I called 9-1-1.  They asked if anybody was hurt.  I said I did not think so.  Although upon reflection it was a weird accident.  They were going too slow to have started spinning out unless somebody yanked the wheel or floored the accelerator.  I hope there was not a medical emergency "in-progress".

I suspect they got response pretty quickly.  Blocking the entrance ramp to a limited access highway tends to get folk's attention.

Slip planes
I once had the opportunity to ask a designer who worked on coal fired power plants how they were able to design fire boxes so they did not tear themselves apart due to thermal stresses.  At the time I was thinking of welding up a wood stove out of steel plate.  His answer was "slip planes". 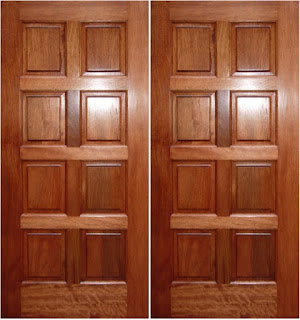 We have probably all seen doors or furniture with wooden panels.  The doors often look like this.

Those panels are usually trapped in tracks but are not glued in place.  The reason is that the horizontal stringers have very little dimensional change with changes in humidity while the panel can vary a great deal.  For example, Northern Red Oak shrinks by 0.2% longitudinally when drying from "green" to "Kiln dried" while it shrinks by almost 10% in the tangential direction.  Gluing the panels would either cause the end joints on the horizontal stringer so pull or cause the panels to split.

I hear stories of the "Good Old Days" when the Germans attended their churches, the Irish attended theirs, the Poles, Czech, Italians, Hillbillies and Mexicans and so on all had certain churches or services that they gravitated to.  In the work place you might have self-segregation by department.  The "deliverables" where the departments interfaced were clearly defined.  They had self-organized their society to include slip planes.

Sometimes the self-segregation was so strange it was funny.  One man told me about a meat packing plant he had worked in somewhere in Kansas.  One shift was an absolute disaster for productivity and safety violations.  That shift was entirely Vietnamese.  A little bit of sleuthing revealed that one man in the center of the floor was from the wrong village and every shift was an ongoing battle.  Once the problem was recognized, the man was moved to a different area.  The area ran very smoothly after that.  His replacement was an African-American.

Even suggesting the idea of letting people self-organize to create natural slip planes causes some people to have a hissy fit.
Posted by Eaton Rapids Joe at 5:37 PM