Intermittency as an issue with Solar Power

Solar power stations are a moronic waste of taxpayers money. This from a guy (me) who lives off grid and depends on solar for electricity. Works fine for me and those who chose to invest and grid tie. The problem isn't the low energy density of solar but it's intermediacy. Same with wind, which on a yearly average generate less than 20% of rated power.

For various reasons, anything more than about 25% unreliable power disturbs the grid. Very little can be done to alleviate that.

I want to tease apart the issue of solar power intermittence because it is core to the discussion of how solar power might fit into the energy generation "ecosystem".

From the demand side
The first thing that I want to point out is that our energy consumption is intermittent.

CO2 emissions are a good proxy for power demand.  Eyeballing this curve, demand spikes in July-August and, strangely, there is a secondary spike in December-January.

The demand also varies hour-by-hour through the day
Highest demand is at 6:00 PM, followed by midnight (!), then 7 PM, then 5 PM.  Peak demand is four times the lowest demand (3 AM-through-8 AM) seen in the 24 hour cycle.

The picture in my head is that mom and dad come home from work, throw a pizza in the oven and kick on the A/C.

So where does that leave us?
Peak demand occurs in the summer when peak sunshine occurs.  That is good.

Peak demand occurs from 3 PM-through-10 PM, six hours AFTER peak sunshine.  That is not good.

Most of the peak demand is associated with cooling.  That ends up being favorable.

The inside temperature lags the outside temperature due to the inertia like effects of the structure's thermal mass.  The walls and floor and ceiling and appliances all hold heat.  They are a buffer or a thermal battery, if you prefer.  It is expensive to store electricity but it is cheap to store heat.

The current propaganda tells us to turn off climate control when there is nobody home.  The propaganda would have to change if we were to exploit the "thermal battery" capabilities of our homes.  We would have to chill them down during the day while we were at work and turn off the A/C in mid-evening. 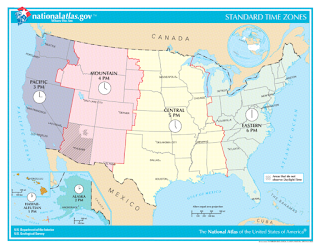 And, at least for the people on the East Coast, due to the fact that the sun is higher in the sky 1500 miles west of them.  Their 6:00 PM (eastern edge of EST) peak can be fed by 4:00 PM (almost Mountain Zone) sunshine in western Kansas.

Winter and summer present two different problems.  The storm tracks in the winter tend to follow the Jet Stream and track west-to-east. 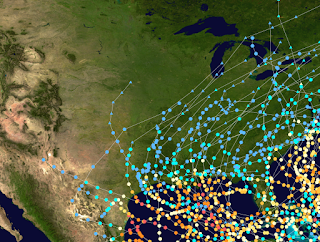 Summer storms are likely to originate in the Gulf of Mexico, track north and then get bent eastward by the Jet Stream.

Since individual storms are of finite size, one way to deal with them is to have several, widely separated solar farms.

Another point in favor of western solar farms is that southern cities tend to consume more electricity per capita than northern cities.

Distributed vs. Centralized
There are enormous economies of scale when it comes to electrical switching and handling.  Instead of millions of over-sized, air-cooled, DC-to-AC switching units baking in the sun atop roofs across America,  The heavy lifting can be handled by relatively few, water-cooled units at each "farm".
I agree that generating your own power has a coolness factor akin to heating with wood but the numbers work out much better for huge, professionally managed facilities.

How much solar?
I could see "sizing" solar to handle 30% of the US peak load.  That is the variable component attributable to Air Conditioning which synchronizes closely with peak annual and daily solar power...or at least close enough.  After that it becomes harder to justify solar power.
Posted by Eaton Rapids Joe at 9:49 AM