In the late 1800s there was much importing of New World botanical specimens to the Old World.  Many of the plants were dug up and imported as live plants for exhibition.

Unfortunately, shipments of grape vines from the New World carried diseases and insect pests that the Old World species were completely vulnerable to. 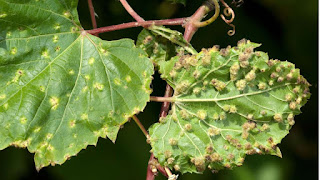 The most devastating pest was phylloxera, a kind of louse that ate the roots and laid eggs on the leaves of grape vines.

The French wine industry was devastated.

Countless gardening enthusiasts stepped into the breach and started breeding Old World wine grapes to New World species in an attempt to combine the Old World grape quality with the New World disease and insect resistance.

Francois Baco was one of these enthusiasts.

Grape historians speculate that Francois Baco planted 50,000 seedlings in his life time.  One of his hybrids was a spectacular success.  One was a minor success.  All of the rest have been forgotten.

His major success was Baco #1.  While some breeders only assign numbers to their creations after those seedlings demonstrated that they are superior to most of their siblings, it is believed that Baco labeled them sequentially.

If that is so, then his best creation was the first seed, planted in the first row the first year he started breeding grapes.  The remaining 49,999 seedlings were the anticlimax.

Some see that as a waste.  I see it as a monument to a dedicated man.  I suspect that many of the 49,999 approached Baco #1 in various attributes, but that none of them were irrefutably superior to it as a package.

How can one know the measure of something if it stands alone?
Posted by Eaton Rapids Joe at 9:35 PM