Playing soon at a theater near you: Public Pension Trainwreck 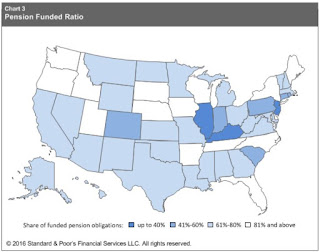 You might think that this issue will not impact you.  You might think, "I am not enrolled in a public pension.  Therefore it will not touch my life."  And you would be wrong.

EATON COUNTY - County officials are considering ... the elimination of four "command" positions and 18 deputies, along with two clerks and two dispatchers. Unless the county renegotiates its contract with Delta Township, 25 deputies who patrol there under a contract between the county and the township would remain in place.


About 75,000 of the county's 107,000 residents live outside Delta Township (in Sunfield, Roxand, Oneida, Vermontville, Chester, Benton, Windsor, Kalamo, Carmel, Eaton, Eaton Rapids, Belleview, Walton, Brookfield and Hamlin Townships). Currently, 17 deputies are assigned outside Delta, and all those positions would be eliminated.


The projected shortfall stems largely from an anticipated increase of $2.2 million in required pension contributions to the Municipal Employees' Retirement System, the pension administrator for current and retired county employees, for the 2017-2018 county budget, Fuentes said. MERS, which manages about 84% of Michigan's public pension plans, changed contribution requirements last year. The county had been paying $3 million a year toward pension obligations for current and retired employees. It anticipates paying $5.2 million in the budget year that begins Oct. 1.

I want to make a couple of observations:
Every jurisdiction is going through the same gymnastics to reduce their exposure to the Municipal Employees' Retirement System levy.  Every jurisdiction is reducing the number of employees on their rolls.  At the end of the fiscal year the accountants at the MERS will find receipts grossly below projections because every municipality jettisoned every employee that was not nailed down.

Citizens will find their taxes and fees going up to pay for services that were delivered decades ago, perhaps before they moved to that jurisdiction.  They will be paying more-and-more for less-and-less.

Otherwise solvent and well-run municipalities find themselves shackled to the railing of the Titanic as less prudent municipalities seek, and get, extensions and exceptions to paying their toll.  For example, the Detroit  Public School system owes MERS $99 million due to earlier failure to make payments.  Detroit skips a payment and Eaton County loses police protection.

The other point
The other point I want to make is that the only way to make the Eaton County situation work is to vastly increase the allocative efficiency.  That is, get better at juggling the resources.

If you accept this as a given, then the last place you would cut resources would be in 9-1-1 and dispatching.

Consider getting several, small, barky dogs.  One big dog is easy for bad guys to deal with.

If firearms are part of your plan, do some dry runs.  Do the first few when the kids are not at home.  Can you find your weapon, ammo-or-magazines and get them operational in the dark?  Can you do it in less than forty seconds?  Adrenalin causes your brain to revert to baboon mode...you need strong muscle memory if your weapon is going to be an advantage rather than a disadvantage.