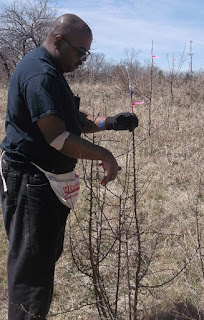 Some of you may remember my friend Marcus Brown from an earlier post on guerrilla grafting of apple trees in a Lansing park near the Lansing Yacht Club.

Well, he and Chitra, his wife, decided to go big.  They bought six acres and planned to plant an orchard.

Oops!  I blinked.  They planted the orchard...last weekend. They are into Getting Stuff Done. 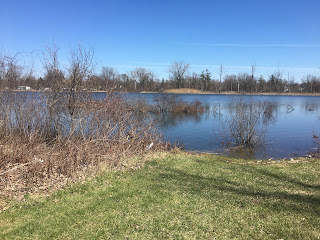 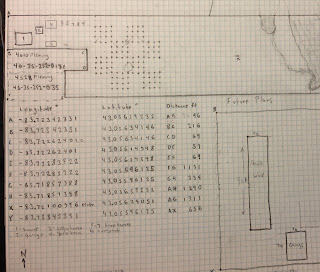 Marcus is a man-with-a-plan.  He is very organized and scientific.  You can see his Latin Squares design-of-experiment layout in the photo just above this text.

Adapt, overcome, improvise
Marcus asked me for some advice.  I told him that labeling trees is always an issue.  I also had a few suggestions regarding managing some volunteers he (might) have.  "Make it visual."

Every reference he looked at emphasized that most fruit trees did not like "wet" roots.  He contacted several University experts and they advised him to choose some other site.  But there were some advantages to this site's location that were not negotiable.  More about that later. 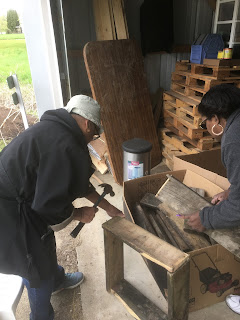 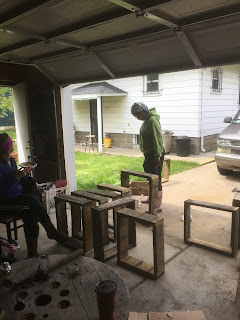 They started with boxes like you would use for raised gardens.  If you cannot lower the water table then raise the surface of the soil.

He also took advantage of the fact that the new Geneva rootstocks were selected to thrive in "non-optimum" fruit growing sites.  It is less of a problem in Michigan, but it is widely recognized that great fruit growing sites are very attractive building sites due to slope, elevation (view) and proximity to large bodies of water.  The breeders at Cornell University realized that orchards were being pushed into non-optimal sites by simple economics.  They dialed in extreme prejudice against seedlings that were fussy about wet feet.

Then, in the interest of experimentation, they simplified.
Here is the kicker 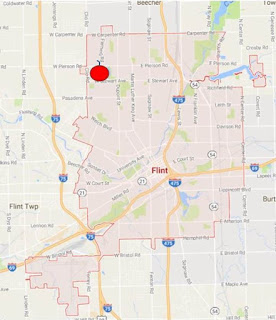 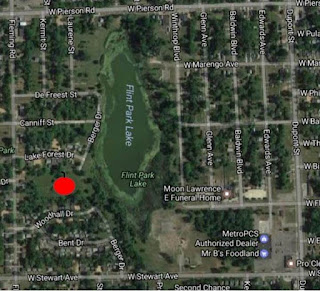 Marcus and Chitra are deeply concerned about "food deserts" in large cities.  They decided to do something about it.  Their orchard is on the northwest side of Flint, Michigan.

There are many big cities pimping local foods and community agriculture.  They tend to be in affluent communities with well-healed corporate sponsors like Portland, Oregon or hip, bleeding-edge communities like New Orleans, Louisiana.  Flint is a gritty, rust-belt city.  Local food is not 'fashionable' and 'hip'.  It is a necessity.

I am humbled by people like Marcus and his wife.  It is an honor to know them.  Sadly, there is only one or two of them for every thousand who protest and complain and march and demand that 'somebody' do something...people who then go home to watch TV and spend the rest of the year in their cozy, suburban homes.  Marcus and Chitra stay at home and get blisters.

If this is anything that interests you
If you want to contact Marcus, he can be reached via email at chess delete this blank frog@hotmail.com

Acknowledgements
Chandra at Stark's Commercial Fruit Tree sales.  This all happened very suddenly and Stark's was extremely helpful in assisting Marcus and Chitra through the ordering process and figured out ways to minimize costs.  Because it was near the end of the planting season, they had many odds-and-ends in their stockroom.  My impression is that they help Marcus and Chitra choose trees that would highly likely to produce fruit as opposed to dumping their over-stock to make a quick buck.


I also expect that he will be planting more trees every April as cash-flow allows.  So far Marcus and Chitra have been funding this out of their own pockets.  They see an advantage to taking time and feeling their way along.  By late next winter they will have a better grip on the kinds of trees that will survive on their six acres.  They will have a better focus on tree spacing and how the will space various types of trees in the future.


For those who are interested in replicating Marcus and Chitra's experience...or if you are inspired to support them...$2000 is about what it would take to plant another 120 trees with boxes, raised beds and so on.
Posted by Eaton Rapids Joe at 9:17 PM