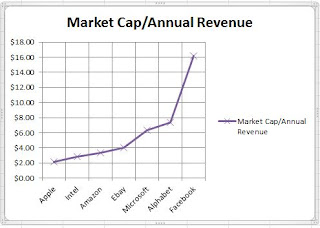 This is admittedly a bit wonky, but the image above shows the number of dollars you would need to invest in each "internet" company to get a dollar of revenue.

"Revenue" is worth looking at because"Profit" is much easier to manipulate.  "Revenue" is a clean number that is difficult to game. The Market Cap/Annual Revenue is useful for assessing long term viability. It is hard to visualize how a company can be viable if customers are unwilling to pay for the privilege of using their products.  Consider print media and network TV as prime examples.

Apple has strong revenue because you cannot have the privilege of carrying around an iPhone unless you pony up the $$$$ up-front.  Apple's vulnerability is that they are in a fashion industry and fashion is notoriously fickle.  It is only by the grace of God that they have not had batteries exploding or reported gargantuan data breaches.  I suspect it is just a matter of time.

Intel, Amazon, Ebay and Microsoft have businesses that are simple enough to explain to a fifth grader.  Intel makes great chip-sets.  Amazon and Ebay have been able to leverage the internet and create huge markets for producers world-wide.  Microsoft makes those Intel chip-sets usable.

Google (aka, Alphabet) is a little harder to get a grip on.  They sell beau coup advertising...virtually every Youtube video has targeted advertising you have to wade through.  Their Chrome and Android are much like Microsoft products.

Facebook....Facebook is weird.  Their dilemma is that social media must be inclusive to function.  Facebooks cache is that "everybody" is on Facebook. Charging a fee would poison Facebook's appeal in the marketplace by making it less inclusive.

It would be fascinating to learn about "elasticity" in social media.  How many users would Facebook lose if they charged a $5 a month subscription?  Maybe half of them?  This link suggests that only 50% of users would even consider paying a monthly subscription for an app.  And that does not even address multiple Facebook accounts.

A second consideration is what happens when governments start taxing social media accounts?  You think it is impossible?   Austria plans to slap a VAT (Value Added Tax) on Google searchs and Facebook Accounts.  You can be sure that every other revenue starved government will  be right behind them.  Isn't a government tax indistinguishable from a subscription to the user?

If Facebook lost 50% of their user how long would it take for it to enter a death spiral? It would no longer have the functionality of "everybody is on Facebook".  (Disclosure, neither I nor Mrs ERJ are on FB)

It is not like there is a shortage of social media sites.

All those really smart stock analyst love Facebook.  I wonder if most of them are "millennials".

Posted by Eaton Rapids Joe at 9:11 AM