Solar farms back east or out west? 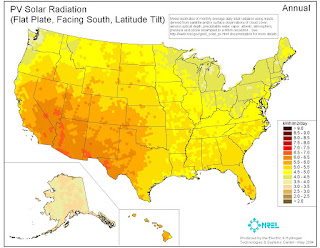 I was curious about the economics of solar panel farms in the eastern United States. 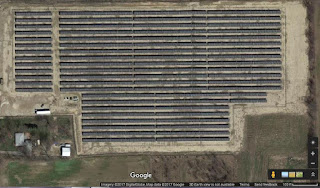 Here is one such farm on the west side of Michigan.  This is a region that gets much snow and "lake effect" rain.  It hardly seems like an economical place to generate solar power.

A key question that can tip the scales involves transmission losses.

According to this document, power losses are approximately 2.6% for an 800kV, DC power line for every five hundred miles of line. 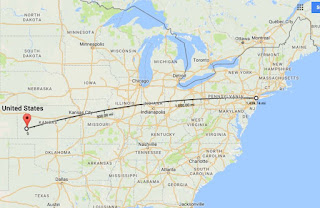 Suppose you built a huge solar farm near Garden City, Kansas (picked because I like the name) and transmitted the power to New York, City.  Would that make economic sense compared to building solar farms in Michigan, New York and Ontario?

Looking at trade-off between Garden City's 5.5kWh/m^2/day vs. NYC's 4.5kWh/m^2/day and the transmission losses:

A panel in Garden City will produce 22% more power based on the incident solar radiation.  The transmission losses over 1500 miles will be about 7.5%.  Throw in the cost of land and the proximity the transmission line would have to Chicago, Detroit, Cleveland and Pittsburgh...and for me it is an absolute no-brainer.  Garden City wins hands down.

The skeptic will point out the possibility of wind damage.  Kansas = tornadoes, right?

The solution is to step up and mount the panels so they have variable tilt  Managers can lay them flat on the ground when they expect inclement weather.  This comes with a huge bonus.  The panels would then be able to track the sun through the seasons.  That amounts to 46 degrees and saves the planners from having to make some painful trade-offs.

Stationary panels are usually positioned to the average sun arc...that is, the latitude.  That means that the panels are non-optimal during peak A/C times of the year when demand spikes.  It also means that the panels will be non-optimal during the times of year when the days are shortest and the least amount of solar energy is falling from the sky.