Rooting around in the cost issues surrounding high, municipal water bills suggests that pension obligations  may be a player.  There are 350,000 families in Philadelphia.  The pension shortfall amounts to $3800 per family.  In Detroit, the shortfall is $6200 per household.

The pension problem is unlikely to fix itself.  The S&P 500 Trailing PE ratio is 23.4 versus a long-term average of about 15.  Consequently there is probably not much up-side in the stock market.  The benchmark 10 Year T-bills are yielding 2.3%.  There is not much money to be made in bonds.  The difference must come out of revenue.

Revenue
Revenue is impaired.  In some places, 40% of the municipal billings are in arrears.

Philadelphia recently instituted rate abatement based on reported income.  This was hailed as a great thing in some circles.

Like the environment, everything in the economy is hooked to everything else.  This ruling will kick them in the backside when they are not looking. 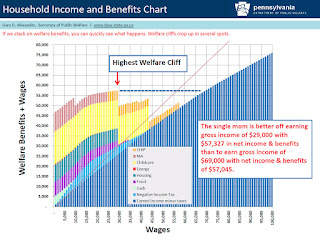 Why would any person making over $40,000 want to live in Philadelphia?

While providing rate abatement based on reported income seems like a kindness, it creates a future conflict between the octogenarian widow of the municipal worker and the single mother who is reaping the equivalent of $57,000 of income.  This becomes a value judgement.  In my value system, the single mother has more options than the 85 year old widow and should, therefore, be given less relief.

Detroit
Detroit recently went through a bankruptcy.  The "Administration" at that time was favorable to "Labor".

The original, back-of-envelop calculations suggested that the pension payouts would get an 80% haircut.

By guiding the proceedings through favorable venues the Administration was able to soften the 80% haircut to a 4.5% reduction in pension payouts.

Observers who understand that mathematics are deaf to high rhetoric and political maneuvering commented, "They will be back." (to bankruptcy court).

High powered (aka, high priced) consultants were brought in to rubber-stamp the deal.  It is a great gig if you can get it.  Translating from the arcane language used to justify high billings into the language of the common man, they affirmed, "This deal might work if many of the Municipal Employees can be separated from their belief that their sole responsibility is to have somebody punch their time card and for the City to deposit their paychecks."  Key phrase:  "...might work...".

They will be back.
Posted by Eaton Rapids Joe at 10:45 PM