The plant shown on the left is a native perennial called Maximilian Sunflower (Helianthus maximiliani).  It is a big, sprawling plant that blooms in September and October.  It spreads aggressively via rhizomes.  This is one of the species we are using to quickly create side cover across a CRP field with the intent of creating a wildlife travel corridor.

It is one of the species that Wes Jackson chose to investigate for "perennial grain".  His goal was to produce 300 pounds of sunflower seeds per acre.  This document suggests that 200 pounds per acre is already being achieved on a consistent basis. 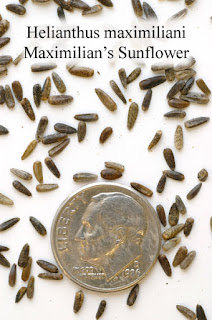 The seeds are smaller than annual sunflower seeds but the birds seem to relish them.

I found a bag of seed I had stratifying in the refrigerator.  The directions from Prairie Moon Nursery suggested a thirty day cold/damp stratification period.  To be honest, I forgot about these seeds and they got away from me. 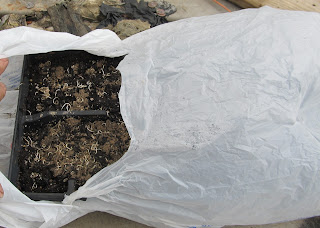 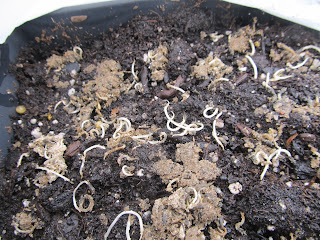 I scattered them atop damp potting soil and pressed them into contact.  Then I made a grocery bag burrito to keep the humidity high and temperatures reasonable.