I recently stopped visiting a well known  Prepper/Survival aggregator website after it got too slicked up.

Maybe "slicked up" is not the correct term.  One of my email friends suggested "monetized" was the word-of-choice.
Half the content in the body of the site are now ads.  The entire right sidebar was already ads.

The real content seemed to drop by at least 50% and most of that was put behind a click-counter door.

I don't begrudge anybody an honest dollar.  I would keep visiting it if the quality of the articles had not also slid.  Most of the articles were breathless gee-whiz articles about why every food pantry should have five pounds of turmeric.

Prepper Website
Prepper Website is an aggregator site that still has that  "mimeographed on cheap paper" feel.  By actual count, it had twenty links in the same space the commercialized site has three ads and three "articles" that looked like ads (Articles about turmeric written by somebody who imports spices.  Go figure) 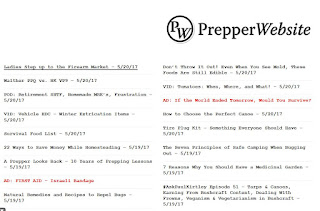 The Prepper Website has ads but they are all conveniently crammed over in the right sidebar.

Tabs
A feature that the new reader is likely to miss are the "tabs" the editor has over in the upper right corner.

Frugal Living
Many of us who consider ourselves "Preppers" do it out of frugality.  We buy things when the seller is highly motivated because we know the prices will be much higher if we are forced to buy those things in a hurry.  That means we need to think ahead...we prepare by storing stuff (like soap and toilet paper and fertilizer and motor oil) we know we will use.

Conspiracy Galore
Not my cup of tea.  I believe in entropy, stupidity and self-interest more than secret societies and such.  To each their own.

Do It Yourself
Self explanatory.

Alt News Hub
Because Main Stream Media is not about news, it is about manipulating opinions.

Shooter's Gallery
Exactly what it says it is.

Is it perfect?
No but the imperfections are minor blemishes, so minor they probably are simply matters of personal taste.

I think the site would be stronger if the "Tabs" were visually cued to look like tabs.

I think the site would be a faster read if the editor placed something in the body of the main page to separate each day's entries; a horizontal line or a blank line.  He date-stamps each article but that that requires more attention on my part than a simple line.

After all, a huge part of Prepper Website's appeal is that I can scan large amounts of information in a short time.
Posted by Eaton Rapids Joe at 7:22 AM