Back to Rape: Part I

In a speech that Detroit Mayor Mike Duggan made at the University of Michigan the mayor pointed out that we have been tremendously successful in improving public health.  No longer do Cholera, Typhoid, Yellow Fever or Malaria strike down tens of thousands of our citizens every year.

He proposed that murder, and by extension other violent crimes, be treated as a public health issue.

I think Mayor Mike is on to something.

Armed Robbery
I would have no trouble convincing the average person that a criminal who committed armed robbery is also capable of murder.  After all, he was carrying a lethal weapon during the commission of the robbery and presumably does not have inhibitions against using it.

Furthermore, I would have no trouble convincing the average person that the criminal who committed armed robbery is also capable of breaking-and-entering.  The criminal demonstrated no inhibition against property crimes and burglary is, if anything, a lower risk form of theft.

It follows that criminals who are convicted of armed robbery probably have a higher rate of both murder and burglary than the base population. 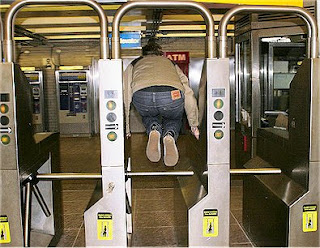 It is difficult to get enough data to perform correlation calculations between different types of felonies because no criminal is stupid enough to admit to crimes he has not yet been accused of.  But there is data between minor crimes, like jumping turnstiles to get on the subway, and major crimes.  If anything, one would expect weaker correlation between minor crimes and felonies than felony-to-felony.

(Police Chief) Bratton retrofitted a city bus and turned it into a rolling station house, with its own fax machines, phones, holding pen, and fingerprinting facilities. Soon the turnaround time on an arrest (for fare evasion) was down to an hour. Bratton also insisted that a check be run on all those arrested. Sure enough, one out of seven arrestees had an outstanding warrant for a previous crime, and one out of twenty was carrying a weapon of some sort. Suddenly it wasn’t hard to convince police officers that tackling fare beating made sense. “For the cops it was a bonanza,” Bratton writes. “Every arrest was like opening a box of Cracker Jack. What kind of toy am I going to get? Got a gun? Got a knife? Got a warrant? Do we have a murderer here?  -The Tipping Point by Malcolm Gladwell

Since the minor crime is in jumping turnstiles, I doubt that the outstanding warrants were for over-due parking tickets or for not paying a speeding ticket.

"...an unlawful attack by one person upon another for the purpose of inflicting severe or aggravated bodily injury"  FBI

If anything, rape is more traumatizing than aggravated assault because it is more intimately violating.

Regard to cross-morbidity, this article says the following happened when Detroit and Houston cleared their Rape Kit backlogs

When the testing was completed, comparisons with the FBI database that contains DNA profiles of more than 12 million offenders and suspects led to 66 new charges. The results also helped police confirm 132 previous arrests that were made without DNA evidence.
Police cannot collect DNA evidence without probable cause.  A rape victim fingering an assailant gives them probable cause.  They can legally collect the DNA and that makes it possible for detectives (or computers) to look for "hits" from the other cases.  If you catch one perp with a smoking gun they will usually roll-over and implicate the others involved in the crime.