I refrained from commenting about New Orleans removing historic statues until now.  I did not have a dog in the fight. Until....

I was unable to comment on a fellow blogger's site because of excessively aggressive captchas.   I wonder if the host filters nearly as aggressively for "liberal" bloggers.  Here is my aborted comment:

The Civil War was equally about the economic domination of the South by the North.  England was ahead of the US in the industrial revolution.  British manufactured goods (from needles to boilers to rails) were less expensive than comparable products from the Connecticut Valley.

The nascent industrial powers of New England, New York and Pennsylvania were able to push through tariffs that beggared the poor Southern landholder.

"Slavery" was the issue that the North whitewashed the conflict with to appear righteous.  The Emancipation Proclamation (1863) "eliminated" slavery in the states that were attempting to secede.  Slavery remained legal in the states on the Northern side.

University "Western Civilization" classes used to teach the Southern perspective of the Civil War in parallel with the Northern perspective.  Presumably, critical thinking was valued and it is not possible to "compare and contrast" when you don't have the other side's perspective.


"History is written by the victors."  Letting the SJW freely rewrite history is to grant them victory. 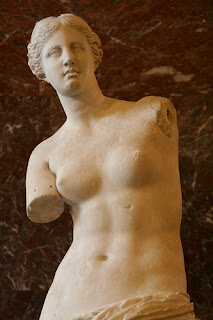 Venus de Milo
Venus de Milo is notable for the damage she sustained over time and at the hands of the uncouth.

Great mystery attends her.  What was her posture?  What was she holding or reaching for?  What manner of barbarian would break off her arms.

I suspect history may look at the damage done to Lee et al and wonder the same.
Posted by Eaton Rapids Joe at 6:24 PM