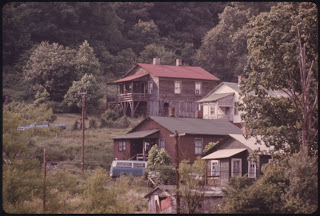 Does he remain a Democrat?

As a Democrat, he will be expected to subsidize large, urban areas at the expense of everybody else. West Virginia has none of those large urban areas.

Large urban areas are grossly in debt. Using the same accounting standards that private companies are required to use, many of their pension funds are 25% funded. Large urban areas buy peace by sprinkling bread-and-circus on rabble-rousers.

Why should families in West Virginia take on debt to rescue cities that gave billionaires hundreds-of-millions of dollars to bribe them to keep their pro-sports teams in a given city? Why should West Virginia families take on debt to rescue businesses that pay their employees (athletes) millions of dollars a year? Can't those businesses cut the employee's pay?

Why should families in West Virginia mortgage their birth-right with debt to bail out cities who mistakenly assumed that property values would always ratchet upward at an ever-increasing rate? Knowledge workers figured out it is easier to send the work over a fiber optic line to the worker than to put the worker in a 3300 pound steel can and ship the worker to the work.

Rents in Pelosi's San Francisco have fallen 30% since Covid. Sales prices are negotiated based on the anticipated cash flow, the change in price will be even greater than 30% because it went from the expectation of rents "trending upward and accelerating" to "a falling knife". Falling property values means falling property tax revenues.

The Black child of two millionaire lawyer parents has a better chance of being admitted to a top-tier university than the child of an unemployed, West Virginia single mom because....diversity.

The coastal flat-landers despise "hillbillies". The Woke crowd will destroy a trainer who names a horse "Grape Soda" because that is racist but sneeringly characterizes West Virginians as Meth-mouth, Mountain Dew swilling trash collectors. The last part may be true. An amazing number of people who do the least desirable, most menial jobs in the Washington D.C. area COMMUTE from West Virginia. Many people working those jobs cannot afford the cost of housing in the D.C. area.

The other thing is that Manchin could look the other way on the Democrats' Second Amendment stand as long as it was just talk. The laws that Democrats WILL pass will make the majority of West Virginia adults liable to felony prosecution.

Does Manchin stay with the Democrats or does he cross the aisle?

Posted by Eaton Rapids Joe at 7:06 AM