Ronald Reagan's first year in office was an economic disaster.

The Jimmy Carter economy sucked. Economies have momentum. The momentum was downward.

Reagan dispensed the medicine and 3.5 years later the electorate had forgotten the pain of the economic correction.

That happened so long ago it is now part of the DNA of all political wonks.

If the economy is hyper-extended and Biden is likely to have an economic contraction on their watch, it is better from his perspective to front-load the contraction and get it out of the way.

From that perspective, Biden's flurry of economy-killing Executive Orders makes sense. They are rewarding their faithful spear-carriers. They are front-loading economic pain and counting on the electorate's short memories. And any pain associated with those Economic Orders can be pinned on Joe which will leave Harris free of any accusations that SHE caused extensive job losses of Organized Labor.

Maybe not easy but easier.

One of the first things we teach our children is The Lord's Prayer.

Jesus was asked by his followers "How should we pray?" and Jesus responded with:

Our Father in heaven, hallowed be your name,

your kingdom come, your will be done, on earth as in heaven.

Give us today our daily bread; and forgive us our debts, as we forgive our debtors;

and do not subject us to the final test, but deliver us from the evil one.

Looking at the second line, the one that is underlined, it is a real challenge to reconcile that with what I see going on in the world right now.

There is no ambiguity, equivocation or weasel-wording in the line. Any rational, analytical reading of the line would declare it a falsehood.

"(It is) the act of the intellect assenting to a Divine truth owing to the movement of the will, which is itself moved by the grace of God"   -St. Thomas Aquinas

"The disciple of Christ must not only keep the faith and live on it, but also profess it, confidently bear witness to it, and spread it"   -Catholic Catechism

If would not be much of a challenge to "do God's will" if everybody else was doing it.

Down the fig rabbit hole.

There are folks raising them in Michigan and Ohio.

Dan Foster in Newport, Michigan has a nice presentation HERE. 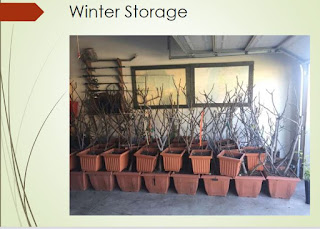 Figs are not reliably hardy in Michigan without extraordinary measures. Dan grows most of his in containers and moves them into his garage. The containers have openings in the bottom and strike roots in the spring when he puts them back outside. Dan partially buries the containers.

You can see how he grows them outside in this video. You get a nice shot of his garden about ten seconds into the video.

Dan has a Youtube channel with several five-minute reviews of fig varieties he has been successful in fruiting. He also has several videos on propagating figs and protecting them from winter weather.

Even if I can never ripen the fruit, I can always use the leaves to cover my privates.