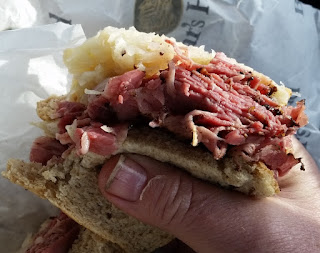 The FDA's order declares that associating Pastrami with Viagra is an implied medical promise. Furthermore, the FDA claims the jingle is antisemitic.

The NYCJDOA's attorney's (and they have some good ones) responded that it isn't antisemitic if a Jewish organization calls something Jewish and chicken soup has long been called "Jewish Penicillin" with no objection from the FDA.

The FDA issued a clarification. Penicillin is not under patent or trademark and doesn't produce significant profits for Big Pharma and is therefore exempt from their scrutiny.

"It is a fact that Pastrami and corned beef are cured with sodium nitrate which gives it a pinkish color. Nitrates are vasodilators which could, and I repeat could, increase blood flow in certain...um...inflatable organs" Professor Girthy said.

"The other pharmaceutical effect might be due to the high levels of Tocopherols and the salt content. Salt encourages the consumption of water and...well, you know...a hydraulic cylinder needs fluid to extend" Professor Girthy said.

"We started a clinical trial and were overwhelmed with volunteers. Oddly, the vast majority of applicants had women's first names" Girthy volunteered. "For example, the first three applicants were Iris Weinshall, Josephine Nadler and Chirlane McCray" Girthy shared.