Sighting in the .22 Project Gun

The problem was the stock. The rifle now wears a Magpul Hunter X-22 stock and a Simmons .22 Mag scope.

I rough-sighted in the rifle at 15 yards, then Belladonna and I made a trip to a private shooting range and we dialed the rifle in approximately 50 yards. 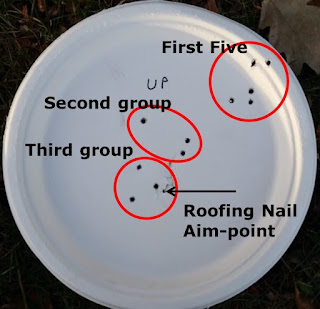 I moved it 14 clicks down and to the left.

The second adjustment was a bit too much to the left but pretty promising for height (Third group).

I made a minor adjustment to move the group a touch to the right then loaded up  some magazines for Belladonna to burn through. My magazines are Biden/Harris compliant and hold the square-root of 13 (169 rounds).

This was about 15 minutes of range-time. 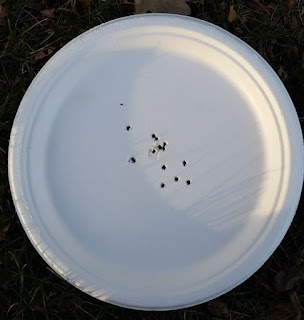 This is not "Benchrest" quality shooting but it is plenty good enough to put a rabbit into the stew-pot at 50 yards. The thirteen shots measure 3 inches from extreme-to-extreme. 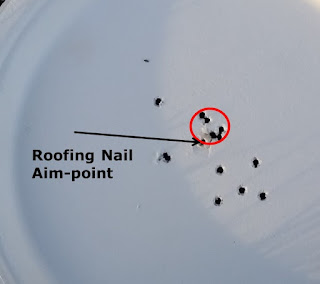 What is very promising is that five of the shots were "head-of-squirrel" shooting. Not only a tight group but very close to the nail we were using for an aim-point.

I know people who would be mortified to put less-than-perfect shooting like this where the public could see it. They strive for one-inch groups at a hundred yards...and they can do it consistently. They shoot off of a bench and many of them don't shoot when it is windy. They would be aghast to have their buddies see these kinds of groups.

I think this is a disservice to new shooters.

Pride is expensive. A weapon that is not sighted-in is at best a stage prop and at worst something that will kill and wound targets you don't intend to hit. Don't let pride or fear of being judged stop you from sighting-in a weapon to the best of your ability. If the only day you can make it to the range is windy, then go to the range and sight in your weapon.

As a practical guy I consider this .22 to be adequately sighted in. It is capable of killing animals up to 20 pounds out to seventy yards. In brushy areas or where the grass is tall you are unlikely to SEE animals that far out.

And if you are patient and take only head-shots or if you put a bullet(s) through an animal's thoracic cavity and you let it lie-down and give the target's lungs time to collapse, it can kill animals far larger than 20 pounds.