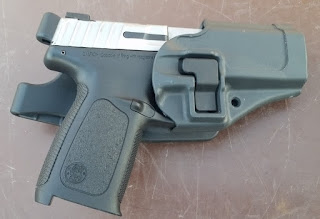 The Blackhawk (manufacture) Serpa (model name) holster is the red-headed step-child of the holster world.

Without going into excruciating detail, two issues have been identified with this holster.

One issue is that if you don't have sufficient repetitions, there is the possibility that your trigger finger might drop into the trigger-guard and discharge the firearm when drawing it under stress. I consider that a training and lack-of-proper-repetitions issue.

The other issue is (possibly) design or assembly related. It involves the holster locking-up and not allowing the user to pull the firearm from the holster.

Yesterday, I had an opportunity to get a close look at a Serpa holster and the firearm it was carrying. 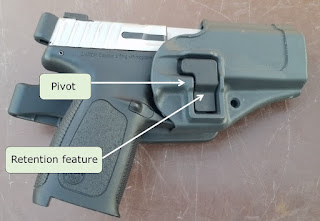 My initial assumption that I would see a roll-pin pressed in as the pivot for the retention feature. 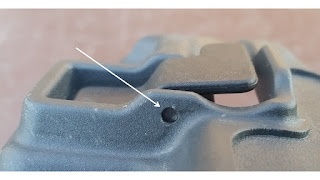 I was wrong. It was a solid pin. So much for assuming the groove on a roll-pin was the issue.

The only other moving part... 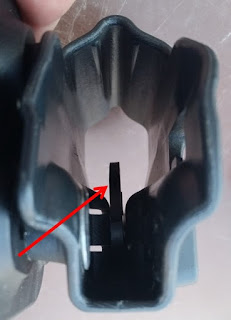 The only other moving part is an injection molded detail that is intended to "snug up" the firearm in the holster and eliminated rattling and the relative motion that can scuff off blueing.

That piece is far more interesting. 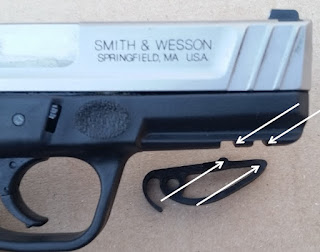 For one thing, the anti-rattle feature is retained by a single screw and can be installed/misinstalled by flipping it over. There is no inherent "error-proofing" in the design.

If installed in the direction shown in the illustration shown above, there are two features that can interact with the grooves on the bottom rail typical of most, modern semi-automatic handguns.

While the features might not interact EVERY time, the polymer used for the anti-rattle is flexible and clearly not glass or mineral reinforced. Given the nature of polymers, the surface contour can creep and conform to the sharp steps at the fronts of the grooves, effectively locking the handgun in place.

Another failure mode might occur in cold weather. The end of the anti-rattle feature could break due to glass-transition issues and the blunt, broken end could lock into the grooves.

Finally, if the anti-rattle piece is a nylon material, it can become brittle under very low humidity as experienced in deserts or in houses in cold climates when heated.

You are on your own if you modify an engineered product, especially if it relates to items that can kill you or bystanders.

That said, if I carried a defensive handgun in a Serpa holster I would strongly consider removing the anti-rattle feature. I cannot definitively say the anti-rattle feature is the culprit because I haven't had a chance to examine "failures" in the field. But as Asimov once wrote, "In an infinite universe, the improbable becomes inevitable."

This is a case of packing your own parachute.

Comments will be appreciated.

Posted by Eaton Rapids Joe at 9:15 AM