Cornelius Krieghoff is claimed by Canada is her own. He painted rustic scenes on what was the raw-edge of of the wilderness.

What attracts me to this painting (and a slew of others that are similar) are the details of everyday life in the Quebec frontier. 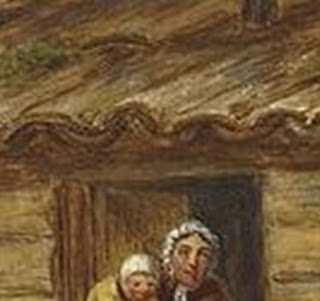 Krieghoff included enough detail to make out that the roof was covered with slabs of bark. The bark was probably peeled off in mid-spring when the bark separates easily from the trunk. The green moss may have been added to address a leak. 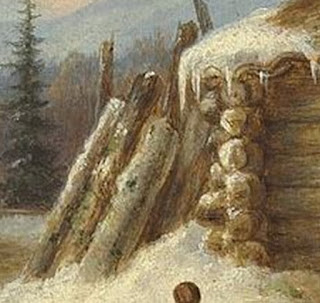 Most of the paintings Krieghoff painted showed wood stored like this. It may have been drying for future construction or it may be intended for firewood. In a snowy climate, in the absence of a dedicated woodshed, storing wood vertically like this makes a lot of sense. 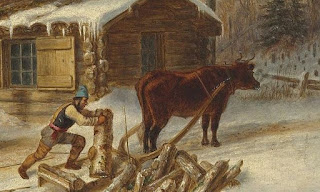 This fellow is stoutly put together. He appears to be wearing gaiters. Looking at the wood he is tumbling off the sled, he appears to have acquired a saw. The stumps in the background look like he used an ax.

The ends of the logs used in the cabin are flatter than one would expect when cut with an ax but not as flat as a saw. That suggests the wood was soft (perhaps spruce) and the man's ax was thin-bladed and very sharp.

Ox are the draft animals of poor people. Horses are fragile, expensive and require better feed than an ox.

The shutters are functional and were cut from big logs.

Why would a man bring a load of firewood when he has three full-cords in log form leaning against the house? Perhaps his wife is baking bread and doesn't want the loaves to taste like turpentine.