First blood for the .350 Legend 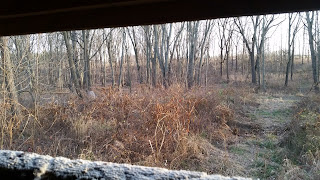 The buck showed up with about fifteen minutes of legal light left.

He was about 80 yards out when I took the shot.

As I watched him run a voice told me "Rack another shell, you ninny!" So I did.

The animal stopped behind a massive Silver Maple with only the right side of his head visible at 100 yards out.

I kept waiting for him to show me to shoot at.

Finally, he gave me a few more inches and I took the shot. And then a third and then a fourth.

At least one of them grazed the Silver Maple.

After the fourth shot, he disappeared.

After waiting about fifteen minutes, I called Bella. Then I walked out to the cottage to wait for Bella and to give the deer time to bleed out.

The deer was a good twenty feet behind the tree. I think the second and third follow-up shots (called "F-U shots" by old-timers) missed and the fourth hit, because that is when he disappeared.

I don't know how much clearer things will be after the full autopsy. I have two holes on the right side of the animal and one on the left. I am not sure how that happens. Maybe I will find a second entrance hole on the left side. Stay tuned.

Tomorrow will be a work day. Most of this guy will go into quart jars and through the pressure-canner. The prime-cuts will go to some friends as gifts.