I am still screwing around with the Blackhawk Serpa holster. It is an engineer thing.

Old_NFO said that he personally experienced a lock-up after belly-crawling through sand. He examined it and there was sand packed behind the paddle that is depressed with the index finger.

I invested about ten minutes to make a wooden device to mimic a handgun. No sane person pours grit onto a working firearm. It just isn't right.

One thing that is not obvious is that there is a "window" behind the paddle that is depressed. 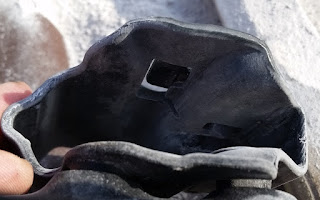 You can see the window in this image taken looking down through the top of the empty holster after the test. 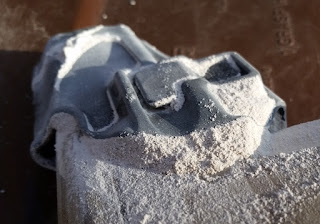 I was able to replicate the failure AFTER covered the muzzle end of the holster with my hand. I was using ground "barn limestone" since that is what I had that was most sand-like. I think the material poured more easily than sand and pouring it in through the opening did not have the same packing effect that dragging it along the ground would.

The "fix" that I want to test is to glue a 3/8" thick pad of open cell foam with small cells to the back of the paddle. That will greatly reduce the likelihood of enough material getting behind the paddle to lock it up. It only needs to move about 1/8th inch to release the firearm.

My brother went to a competition in Rockford, Michigan where they allowed Serpa holsters ONLY if the retention feature had been locked out with a 2" piece of surgical, rubber tubing.

And this is where I piss off some of my readers. How many people drawing a handgun from a holster keep their trigger finger pointed down the slide...nearly all of them. In fact, there are some instructors who teach students to "Point shoot" the first round before they have a sight picture with the intention of rattling the goblin and (hopefully) taking him out of the game early.

The fact that all of the Negligent Discharges seem to happen at competitions suggests that the shooter is not practicing enough outside of the competition. Slow is smooth. Smooth makes fast.