The deer are still in the woods and not hanging from my pole.

Corn to the north. Winter wheat to the south. Cover to the east.

A few deer are trickling across the property from the winter wheat to the corn, but most swing east through the heavy cover that is not on the lease.

I saw two yesterday but it was out of the corner of my eye. The one in back was not very large.

I am not adverse to shooting does. I just want them big enough to be worth the cost of the tag.

The temperature dropped quickly yesterday afternoon and my legs got cold.

I went back to the truck and got a sherpa-lined, flannel shirt and draped it over my legs. That made an incredible difference. I never appreciated how much heat I lose out of my legs when I am only wearing jeans.

My first trip to the store(s) did not net me usable overalls. The fitting rooms are closed.

The second trip to the store(s) had me swap into different sizes. Mrs ERJ encouraged me to go back and make the exchanges while I still knew why they didn't fit and while I could still find the receipts.

I installed a new bathroom vent fan today. The old one squealed like a pig.

The original installation was in 1975ish and the house was wired by Billy-bobs. 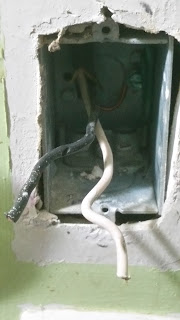 The old fan had two 2X+ground, 12 gauge wires going into it. The timer receptacle looks like this.

I dropped the breaker, cut the wires and stripped the insulation from a bit of the ends. Turned the breaker back on and turned on the timer. Then I checked for power and found the hot-leads.

Clearly, I missed something because when I put it all back together the fan kept running regardless of what the timer was set at.

The goofy thing is that the space inside the fan-body for attaching wires is not very large. I will need to add another electrical box if I am going to stay compliant with the NEC.

I will attack that in the morning. As Scarlet said, "Tomorrow is another day." 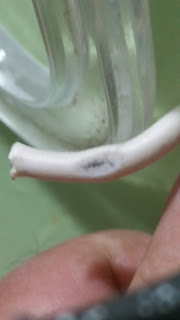 You can see where the insulation on this wire "crept" away due to being pinched. Depending on which leg the original "electricians" used (hot or neutral/return), this could have caused shorts and blown breakers.

Since I don't want to rip the box out of the wall and re-drywall I will probably use a simple on-off, toggle switch rather than a timer. The on-off switches don't use nearly as much volume as the timer.