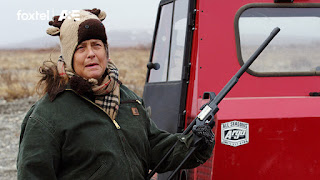 Let me start off by revealing that I do not watch very much TV.

For a while, I enjoyed Life Below Zero. LBZ is a "reality" TV show where video crews are embedded with Subsistence families in Northern Alaska. Each episode bounced between two or three families as they prepared for, or experience winter.

After watching a few seasons it became clear that the video crews were influencing the families to lesser or greater degrees.

One of the families, the Hailstones, appeared to be less jacked-around than most of the others. I really liked the segments with the Hailstones.

The people who lived alone appeared to be most vulnerable to being jacked-around with the one pictured above, Sue Aikens, being the most manipulated.

I understand one must sometimes do things that makes OSHA uncomfortable, but Aikens did stupid-dangerous things so often it had to be provoked.

Another person who did some stupid stuff was a gentleman named Glenn Villeneuva. He swam across a river filled with snow-melt in a section where the current was strong and he swam from inside of a bend to the outside of the bend.

As far as I can tell, he did not have any reason to cross that river, much less cross it at such a danger place and time. Provoked?

So I ask my readers to not let the video-journalists provoke you into doing stupid stuff.

That includes sharing your intentions or what you would "like" to see happen.

Don't be Sue Aikens. She got a busted shoulder and the video crew got bonuses.