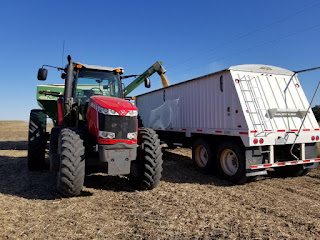 This essay will be from the perspective of Fundamental Analysis.

Suppose your family owns a small, 1000-acre farm in Outer Midwestlandia. Furthermore, suppose your thumbnail accounting suggests that your "break even" is $3/Bu corn at 200 bushels to the acre. In other words, a gross of $600 an acre. 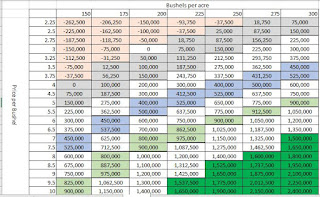 What is worth noting about this table is the non-linearity. Suppose you have a terrible year and you only get 200 bushels per acre and the price is $3.25 a bushel. Your family only netted $50,000. Hardly worth staying in the game.

Now suppose you get one more inch of rain in early July which adds 25 bushels to the acre and the price is a measly fifty cents a bushel higher. Your family nets $243,750 for the year representing a +$193,750.

So in the farming business, one really good year can make up for three mediocre ones.

Inside that $3/bu break-even price

The unmentionable is that that break-even price excludes a huge, implicit fixed-cost. Most of that $3/Bu is "variable cost".

An economist would include the opportunity cost represented by the current mortgage rate-times-the current assessed value of the land.

Suppose a major food conglomerate bought the tiny, 1000 acre farm for its current assessed value of $13.5 million. How much profit would they require to justify that investment?

Assuming the corporate farmer's economies-of-scale offset the family farm members' willingness to work "for love" and that yields still hover around 200 bushels per acre, the price per bushel would have to rise to about $5.70 for the corporation to "break-even".

So why the huge difference: The family farmer thinks he is breaking-even at $3/bu and the corporate farmer needs $5.70/bu?

The family farmer treats the cost of the land as a sunk-cost. He does not emotionally treat the land as a fungible unit of production.

The corporate farmer's perspective is that he will send "the next dollar" to the investment that promises him the greatest, sure return. If a risky investment cannot match the rate-of-return of the sure-thing, then he is losing money and exposing his investors to needless risk.

Back to my farmer friend

The farmers of America are getting older. Much of the farm property is already held by trusts and by absentee owners who have no particular attachment to the land. As the sixty-and-seventy year-old farmers "tag-out", more of the land is likely to be farmed by highly leveraged, corporate-type farmers.

In the absence of stronger crop prices, it might not farmed at all.

Dropping farmland out of cultivation will have two consequences. The price of farmland which has been driven up by speculation will tank. Farmland that is not cultivated is, by definition, surplus. Surpluses cause prices to drop. The second consequence is that crop prices are likely start to creeping up as the system seeks an equilibrium.

Fundamentals of profitability can be ignored but they cannot be ignored forever.