Big turn-out so far. My tiny precinct had 90 voters by 9:00AM. The other precinct in my township has more voters.

The line to get into the fire station where the polling is held was only ten voters long while the other precinct's line had fifty voters.

Everybody was civil. I chatted with the gentleman standing in line in front of me. It was a pleasant way to pass the time waiting for my turn to vote.

He was curious about how much Covid-19 would change social behaviors in the long-term. Will people stop shaking hands or will it actually mean something more than it did pre-Covid...i.e., will it be a sign of mutual trust and a tangible sign of a willingness to share risk? 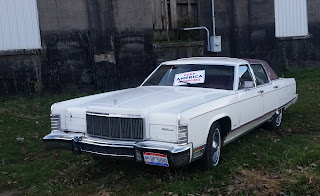 I saw this car while driving home. What a ride! I love the gritty, industrial-looking background.

If you are looking for some serious Detroit iron to drive, it is probably for sale. It is in front of the onion-sorting barns on Bunker Road.

She informed me that businesses along the M-43 business corridor are boarding up their windows in preparation for possible "festivities".

Are states with late counting "irrelevant"?

One scenario for states that allow ballots received long after Nov 3 is that their votes become irrelevant.

At one time, Michigan proposed moving its primary to before Super-Tuesday. The thinking was that the major decisions had already been made by the time Michigan had its primary. Why incur the expense if it does not materially impact the outcome?

The major parties said "Have it any time you want, but it won't count at OUR convention"

If the contest has already decided before Pennsylvania and North Carolina count all of their ballots, then their results will be an enormous anti-climax.

If the ballots in Pennsylvania and North Carolina flip the Electoral College decision, the two states will be embroiled in recounts and other expensive imbroglios.

Not a good position to be in.

Posted by Eaton Rapids Joe at 9:39 AM