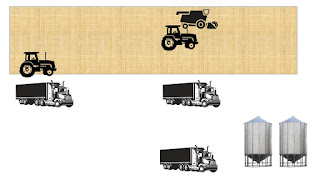 Farming has a systems engineering aspect to it.
You have to look at your operation as a complete system.
As an example, I'll use our farm, during harvest.
Start with this concept...
The Combine is the most expensive piece of hardware on the farm, so you want to keep it running, you don't want it sitting idle during harvest.
Therefore you develop as system approach to harvest
So what I've tried to capture, is a balanced, optimized system.
So what happens if you purchase or rent more land.
You might decide you need a bigger 12 row combine.... which picks more acres per hour...
....... however, that would only be true if he's running all the time....
That's where you've upset the cart by changing only one part of the system.
The point being, that you can't just change just one facet of your harvesting system.... you need to address all aspects, otherwise, you just move the constraint to another location.  And spending big money on a bigger combine that sits half the time waiting, and in the end only harvests the same number of acres per day as your old combine because of other constraints..... is a bad investment.
Have fun Joe.
The problem your looking at is a whole lot more complex than you might imagine.
There are just so many variables.
And a key issue is that today's money isn't tomorrows money....... i.e. Money does not equal Money..... which makes it hard to grasp.
Risk takers can win big
Risk takers can lose big
i.e. If there is a major crop failure that hits 70% of the farmers, (hail, wind, fungus, blight)
- Price of crop goes up because of the reduced overall crop
- If your part of the 70%, the increase price doesn't help..... you have none
- If your part of the 30%, the increase price gives you a banner year.
I've tried to touch on what I consider important aspects of the problem, but I'm sure there is much more.
Posted by Eaton Rapids Joe at 6:00 PM