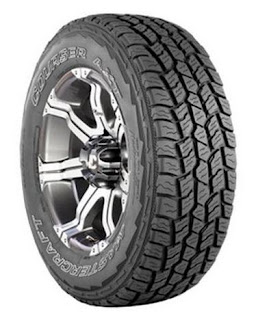 Mrs ERJ's minivan has new tires on it. Like all honorable men I take care of the wimmin-folk and children first.

The gentlemen in the tire room approached the project with trepidation. "Are you sure these are the tires you want?" the first man asked.

"Never seen these on a minivan. Are you really sure?" he asked.

He sent a minion into the back room to get them and he came out with two when the computer said there were four. I looked at the tread of what he brought out. "That is not what I ordered."

This back-and-forthed about three times. "Are you SURE this is what you want?"

"You darned betchya." I said.

They finally believed me when I told them we have four children and Mrs ERJ is immune to whining, whether it came from hungry kids or A/T tires on the pavement. My priority is to keep her, and the van, on the pavement. Or, if it goes into the ditch to have tires on the vehicle so Mrs ERJ has a fighting chance of getting it back out of the ditch.

It is more than just the traction. A/T tires have stouter sidewalls than all-seasons and have greater resistance to trash in the ditch poking a hole in them.

After the tires were installed on the minivan, I drove it out to where I hunt to make a few minor repairs.

My impression is that the friction on dry roads is noticeably less than the tires that came off and that the whine on normal pavement was non-existent.

Compromises
All tires are compromises.

Snow vs dry friction
We live where blowing, drifting snow is a likelihood four months of the year, Dec-March and can happen November and April too.

I will happily trade friction on dry roads for improved grip in fresh snow and slush. Friction on ice is a myth so I don't give that much consideration.

I recall when a lineman for the utility was working on a power-pole in our side yard. It was after midnight. The wind was blowing fifteen miles an hour with gusts to thirty. The transmission line had dropped off the pole and caught the top of it on fire. Their truck got stuck in the yard due to the torrential rains we had received earlier.

I made some "empathy" comment about this call really having a high suck-factor. The spotter on the ground replied, "Power lines never fail when it is sunny and seventy." What he was telling me was that field calls almost always have a high suck-factor, that nasty weather is when they earned their paychecks. In good weather, they drank coffee.

I feel the same way about tires. Even bald tires will work fine when the pavement is clean and dry and you leave enough room between you and the joker in front of you. I see little reason to spend money to improve performance on dry pavement when dry performance for any tire is already four-to-ten times better than performance on snow.

Retirement used to mean that I could look out the window and say, "I am staying home today." but that changed with mom-and-dad care. There is a back-up but that is for emergencies, not six inches of snow.

It is truism in the Quality world that the more often you have to make adjustments to the equipment the more defective product you will produce.

Bringing the analogy back to cars: Suppose you had a choice between two vehicles, one has a fuel tank that can only hold sixty miles worth of fuel and one that can hold ten thousand miles of fuel. Which vehicle is most likely to leave you stranded on the road with an empty gas tank?

Let me be clear, I am not asking which vehicle must visit the gas station the most often or which will have the highest fuel costs, I am asking which one will leave you walking in BF Nowhere most often?

Good tires are one thing I am willing to put on the credit card if it means I can have them on the vehicles before the weather gets bad.
Posted by Eaton Rapids Joe at 10:00 AM