Stub 8.8: When your skin crawls

Zev took a day off to recover.

He had been burning more than two thousand calories a day and had been taking in less than twelve hundred. There comes a time when it becomes difficult to think clearly.

Zev collected his smartphone from where he had stashed it and then slowly made his way up to his hide in the rugged hills west of Silicon Valley. He ate two of the food bars Scooter’s wife had made. He did nothing for one, entire day except digest food, drink clean water, absorb sunlight and pray and plan.

He was heartened to learn that Scooter had recruited an information technology person who had been “outed” because he was suspected of being unreliable. Zev passed along the coordinates and time frame of his next action. Zev also requested misdirection at appropriate times. This next step was going to be a little hairier than the lacrosse game.

Even if the communication had been intercepted, the people intercepting the comms would have only seen pictures of babies and trophy fish and dogs since they did not have the burn-pad that identified which of the 2 million pixels in the picture were encoded. Sending locations were masked by anonymous bounce sites.

Thirty hours later…
Zev eased himself into the weeds that marked the cusp of the road grade separating I-280 and the lots at the end of Redwood Dr. 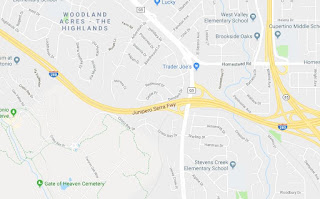 Zev had identified the ambush site decades before. He had been driving south on the Junipero Serra Freeway when he suddenly became so uncomfortable that his skin crawled. The location was just west of Foothill Boulavard where the roadbed went sub-grade and swept from heading south-east to due east. 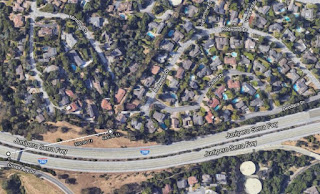 The early morning traffic came to a complete standstill as drivers rounded the corner and were blinded by the rising sun. They could not see anything but the brakelights in front of them. Stationary, blinded targets, trapped sub-grade. It was as perfect of a killing field as Zev had ever seen. He never took that freeway again. He drove surface streets even though it sometimes took thirty minutes longer. His reaction was just that visceral.

The Sedelia offensive had dropped the spans over Foothill Boulevard and traffic had to exit the freeway and re-enter on the other side of Foothill. That would have been a major cluster festival except the Cali economy was so moribund that traffic was only 25% of what it had been before Sedelia had succeeded.

Zev positioned himself while it was full dark. He had learned from his experience at the lacrosse game and had doused himself with insect repellent. Looking like garbage might fool humans but ants were not deterred.

Zev hoped that whatever support he was getting from Scooter’s IT guy was focused on the right place and time.

Zev's scope had a two minute-of-angle laser dot and no optical magnification. At two hundred yards the glowing red dot that marked the point-of-impact in the scope covered a four inch diameter circle. That is, it covered half of a man’s face at two hundred yards.

Traffic picked up as expected.

Zev could hear pedestrians, those lucky enough to have jobs, leave their homes in the subdivision to his right. He heard them walk toward the bus stops on Foothill. His senses were extremely acute due to his low calorie status and the tension of the mission.

On cue, the sun rose and the traffic became a rolling goat festival. Just like every morning in Silicon valley.

Zev inserted his hearing protection. It was almost show time.

Zev saw the persimmon colored CTS-V from four hundred yards away as it came around the curve. It glowed as if it were radioactive in the brilliant, early morning, California sun. It slowed in anticipation of exiting the freeway.

At two-hundred-twenty yards, Zev shot the center of the windshield of the vehicle in front of Mark Smothers’ Cadillac.

The driver hammered his brakes and swerved to the right, clipping the car next to him.

The CTS rear-ended the vehicle Zev had just punched a round through and came to a full and complete stop.

Zev could clearly see Smothers’ silhouette inside the car.

Zev’s aimed his second shot in the center of that silhouette. He needed to break the windshield before he was certain that he was hitting Smothers.

At the second shot, the full-power 855 round blew Zev’s supressor off the end of the barrel and it flew 40 feet downrange. Zev was fully focused on the mission and did not even notice. The full power, military ammo cycled the action of the firearm and Zev was able to maintain the supported, prone position and to continue firing without breaking stock weld.

Zev shifted his aim around. High of center. Higher of center. Left of center. Right of center. Center. Hitting the wire of the chainlink fence had been a reminder that Murphy stalked the optimistic. Zev was not going to have his mission fail because his rounds were being deflected by the steel-cored rim of the steering wheel or the left windshield post.

The other drivers were oblivious. They were encapsulated in their hermetically sealed vehicles.

The neighbors were not oblivious.

Popping his hearing protection, Zev heard stirring from the neighborhood.

In seconds, he broke down his weapon and had it stashed in his trash bag.

He dumped seven 7.62mm cases on the ground and poured his spent brass into the ziplock baggie.

Then he was hoofing northwest. Distance is time. Time is safety. His plan was to go a mile northwest, cross under 280 and then head back into the wilderness.

95 miles away, somewhere west of King City, Scooter and Young Jung Kim the IT guy were watching in real-time via the security cameras Kim had hacked into.

“Can you cover for him?” Scooter asked, anxiously.

“No sweat. I saved some footage of a white SUV starting up on Deodara, driving east and then turning south on Foothill.” Young Kim said. And, with a few key-strokes, Kim over-wrote the footage of Zev heading northwest on foot. “It won’t fool them for long because the time-date stamps are wrong, but it will confuse them for a while.”