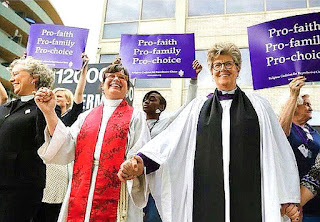 On November 9 many faith-leaders will gather at the Planned Parenthood clinic in Columbus, Ohio to "bless" it.

Many of the faith-leaders claim to be Christian ministers.

Pro-choice, Christian ministers often justify their position by pointing to Exodus 21:22. After all, you cannot argue with the Bible:

When men have a fight and hurt a pregnant woman, so that she suffers a miscarriage, but no further injury, the guilty one shall be fined as much as the woman’s husband demands of him, and he shall pay in the presence of the judges.

They neglect to mention the next verse:

But if injury ensues (to the mother), you shall give life for life

My interpretation is that miscarriages were common events in Biblical days, driven in part by not enough calories and austere living conditions. By some estimates one out of every three pregnancies ended in a miscarriage.

God, via the Bible, tells us to judge the men who are fighting with mercy, that the mother may have miscarried whether she had been bumped by the fighting men or not. A coincidence of timing.

However, if the fighting men left marks or injury, bruises perhaps, on the mother then the community is to judge the lost baby as a byproduct of the men fighting and the man who is not the husband is to be put to death.

I think the faith-leaders who are blessing the Planned Parenthood clinic should get honest and stop pretending to believe the Bible.
Posted by Eaton Rapids Joe at 9:00 AM