Fun with numbers on a Sunday morning


Chapter 27 of Leviticus sketches out the "value" of men and women at various ages.

The context is that swearing an oath on God's name is absolutely forbidden but one might swear an oath on one's own life.

Should one break that oath there was no value to society to have that person kill them self. Maintaining population was a touch-and-go thing back before modern medicine. Rather, they had to redeem themselves by donating the appropriate amount of money to the temple.

I assume that it might have been used as the basis for atonement money should a person accidentally be killed. That eye-for-an-eye thing: That was not a mandate but the legal limit. You were not prohibited from accepting a settlement in lieu of retribution.


Big, giant, fat disclaimer
Don't take this as a peer reviewed, academic paper. This is a retired nerd having some fun with numbers.

If one were inclined to fit the data with a smooth, cubic polynomials, they would look like this. 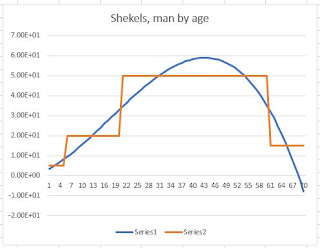 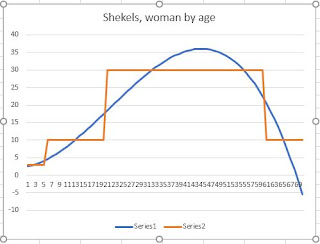 Taking the smooth curves and translating them into grams of silver 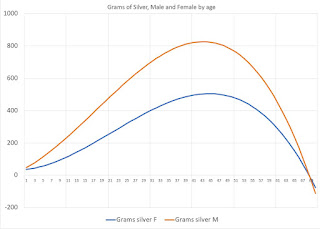 This might be useful if one wanted to have a sense of how much silver would ransom your life in an austere, pre-modern environment.  Short answer? 800 grams if you are a man (roughly $400 worth of silver at today's price) and 500 grams of silver if you are a woman (roughly $250 worth).

The smooth curves can also be used to calculate the prevailing interest rates by working backwards from Net Present Values of the income stream. Later in the text, it is implied that the default values represented two years of income for the default worker. That is, two shekels a month.

Understand that I am taking coarse numbers and implying a precision that is not defensible. But if you mindlessly crank the handle on the adding machine, you get a discount rate, effectively an interest rate, of 50% per year.

While that seems astronomically high it can be explained by the fact that the population was static. Not only did the economy not grow, it could not grow. The high interest rate is an artifact of the static economy, not the cause of it.

Final note
If these values were used for atonement settlements between private parties, then it implies that the settlement was not intended to support the widow or widower for the rest of their natural lives. Rather, it gave them a two year window to deal with their grief, find a new mate and then get on with life.

***Methods***
An on-line service was used to calculate four equations with four unknowns.

The unknowns were the coefficients: At^3+Bt^2+Ct +D

The equation was integrated and the definite integral for each piece-wise segment was a separate equation. That is, (1/4)A(tf^4-ti^4)+(1/3)B(tf^3-ti^3)+(1/2)C(tf^2-ti^2) +D(tf-ti) + E= Area under the piecewise line segment. E, the variable that is introduced when integrating disappears when the definite integral is calculated.