Getting pumped up about deer season 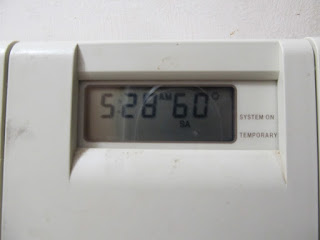 Kubota is inclined to open windows when he is hot rather than take off over shirts.

Mrs ERJ is inclined to turn off the furnace when Kubota opens windows.

Sometimes it gets chilly in the house. 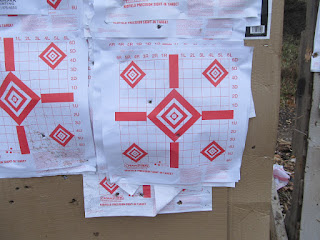 I tried a different kind of ammo in the Mossberg 500.  This is at 100 yards. Five inch groups are nothing to brag about but being within 3 inches of the point of aim will kill truckloads of deer.

One person I talked to suggested that barrel heating might be the cause of my vertical stringing. His thinking was that the barrel grows with heat while the magazine does not. The magazine and the barrel are joined about 1/3 the way from the muzzle. That could cause the barrel to tip downward. While I don't fully buy the theory, the first shot has always been the highest.

I see that there are aftermarket kits for Mossberg 500 trigger springs. I might have to spend the money and check that out. 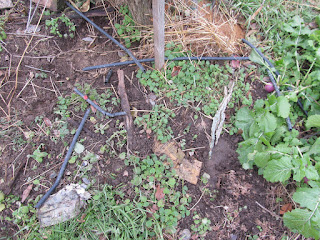 Herc, our older German Shepherd, does not like anything snake-like. I think he got the vibe from Belladonna and he is protective.

Pity that I will have to buy new tubing for my trickle irrigation.

Michigan Firearm season opens Thursday.
I seem to be on the mend from the cold.

I am getting excited. The current plan is for my youngest brother to share the Taj with Doug, a family friend. I will be in the orchard stand with Nephew Nick while Tom and Max are in the swamp stand and Mack is in the tree stand on the north property line.

The orchard stand is windy and can be bitterly cold. I put in windows last year but one of the hunters who used it later in the season broke one of the windows. I hung a flap made from a dog food bag over the broken window today.

This will be the first deer season since my brother died. Deer season was a peak experience for him. I am looking for a good photo of him to put in the Taj, his usual stand.

People who are fey claim that the separation between the living and the dead varies. They point to road grades in Appalachia. Sometimes the coal seam is deep. Sometimes runs just below the surface. Sometimes the seam is exposed to the open air. The coal seam is very close to the surface during deer season and I expect it will be exposed and smoking when we are tracking a blood-trail.

One of the things we have not discussed as a family is whether we should try to shoot a deer to feed a poor family. I think local families that were struggling to put groceries on the table ate twice as much venison as my brother and his family did.

Michigan has Chronic Wasting Disease and the DNR really wants to knock back the breeding population. That means that doe tags are easy to come by. Much easier to buy a tag than to find one an bring it to bag, that is.
Posted by Eaton Rapids Joe at 8:13 PM