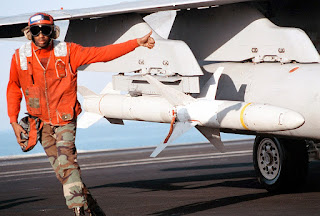 Within certain circles there is an ongoing debate about the effectiveness of missiles in the event of a "large" war.

It is a Blondes-Brunettes-Redhead thing.

The cost of missiles
Critics question the cost effectiveness of using a million dollar missile to take out a ten year old Toyota Hi-Lux truck.

The weak point in their argument is that missiles are a highly engineered product and nearly all of the cost is the fixed cost of designing, testing and tooling production for them. The per-unit, variable cost isn't that much!

Solid rocket fuel is 70% ammonium perchlorate at $6 a pound. Most of the rest is powdered aluminum and binder.

Assuming most of the electrical brains are on integrated circuits it would cost more to turn on the machines and validate than to punch out another 1000 brains. If the brains are not available, the free-on-board cost of a low-end smartphone is $15 at the factory if you buy in-bulk. Smartphones are another highly engineered product with low variable costs.

The pricier stuff are optics and the little motors and the high energy batteries.

A credible "commodity" smart missile might weigh between 160 and 800 pounds depending on the target.

At fifteen bucks a pound + $15 for the brain and another hundred for the high-end electric motor you are looking at about $12,000 variable costs per missile for the big one.

If the Toyota Hi-Lux trucks has terrorists and their weapons on board, I would shoot them all day long with $12k missiles. That is a no-brainer.

And let's insert a bit of perspective here, a missile can pull 80g and travel at 1,400 mph. A Toyota Hi-Lux is a great truck but is must travel on a 2-D surface, tops out at 100mph on hard, flat surfaces and is lucky to get 0.4g braking on a dusty surface. The missile does not need to have high end performance kill a Hi-Lux.

Added later:
In a perfect world, Trump would throw a challenge on the table: How many AGM-114R do I have to buy to get the price down to $10k per copy?

The AGM-114R weighs about 100 pounds and has a nominal range of five miles. It also has the option of being launched from an unmanned flying vehicle.

The current extended price is $99k per copy but I hasten to point out that most of that cost is fixed and very little is variable.
Posted by Eaton Rapids Joe at 10:00 AM