A day of collecting 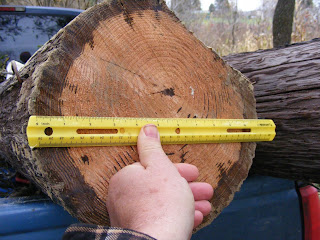 The utility companies are doing quite a bit of pole maintenance. They typically cut the old pole into pieces short enough to handle and leave them in place for a week or two before sending a truck to collect them.

I, being the fine fellow that I am, I helped them out.

I shouldn't complain about free stuff, but it would have been nice if they were eight feet long instead of seven. I use eight foot posts in the vineyard and these would have made world-class end posts.

Using 32 lbs/ft^3 these sticks weighed about 140 pounds. I must be getting old. I found it a chore to drag these out of the ditch and get them pitched into the back of the truck.

Belladonna is going to laugh when she reads this. She was disappointed when she did not PR deadlifts this week. She did a couple(!) of 405 pounds as a warm up and then stalled when she tried to deadlift 435 pounds. She got the weight three inches above her knees when the bulge of her rectus femoris wrecked her lift. I should have had her pitching the sticks into the back of the truck. She probably could have done it one-handed.

The lady is retired and she grows native plants as a small business. She looked and moved like an athletic forty-year-old. Just shows that we rust out way faster than we wear out.
Some of the seeds she collected were from persimmons. Persimmons are not native to Michigan but are native in Central Indiana. Some of her clientele might have an interest in more southern plants as a way to diversify their plantings in the event of climate swings. 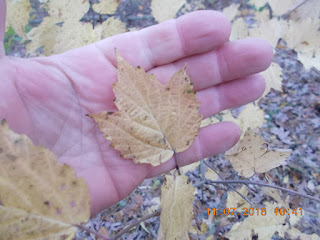 She also collected seeds from a Mapleleaf Viburnum. It lives up to advertising as being adaptable to dry, shady sites. This clump was growing on a sandy ridge beneath some White Oak.

The lady was pleasant company and it was interesting to hear that other parents have had some of the same experiences with their kids as we have had with ours.

Taking care of a friend
One of my friends is 78. One of his heart valve went tango uniform. His insurance insists that he find three doctors who agree that surgery is both indicated and survivable.

He works full time, five days a week. His wife has a condition that is progressive and going to work is essential to his sanity. It is the metronome of his life. He cares for his wife five hours a day, commutes, works eight hours.

It has been a chore to find those three doctors.

One of the candidates told him he would agree to the surgery if a dentist pulled his teeth. So now he is nursing some very sore gums.

I planted a few hazelnut bushes for him today. He did not come out and help. I think he is feeling pretty beaten down.
Posted by Eaton Rapids Joe at 4:41 PM