Weeds are trying to tell you something 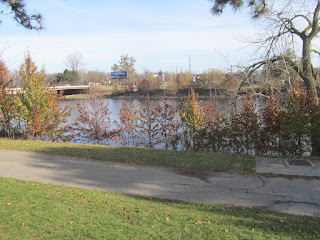 Mrs ERJ and I were walking in Lansing's Adado Riverfront Park looking at invasive Bradford Flowering Pear trees taking over the riverbank.

Bradford Pear, Pyrus calleryana, makes a dandy pear rootstock especially for Asian pears. And pears are the single best fruit to grow when in a no-spray environment because worms cannot mine enough protein from the fruit to grow. 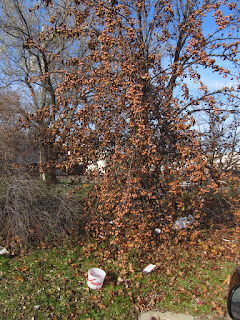 Later that day I saw a specimen with larger-than-species fruit. I checked them out and they were almost edible. The leave suggest that it was a grafted tree that died and the rootstock is a P. calleryana-pyrifolia hybrid.

A gallon of the fruit may have followed me home.

Another clue involves the leaves. Calleryanna hangs onto its leaves into November. It wants to be a tropical tree. Pyrifolia is a temperate species and dumps it leaves. If you look at the photo of the tree you will see very few leaves hanging on.