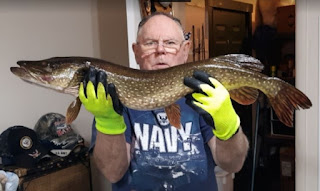 Tom is one of my coffee-drinking buddies.

He was fishing for crappie last night when he hooked into a 33 inch Northern Pike.

He had to keep the line tight and the tip of the rod up while he called his friend Bill.

"Bill. I need to have you bring the net down to the river. I gotta big Northern on the line."

"No, really. I need to have you bring the net" Tom said.

Tom managed to keep the pike occupied while Bill found the net and drove down to the river.

For those of you who notice Tom's shirt, his motto is "Construimus, Batuimus".

He served in Da Nang, South Vietnam
Posted by Eaton Rapids Joe at 11:24 AM