Not my circus, not my monkeys 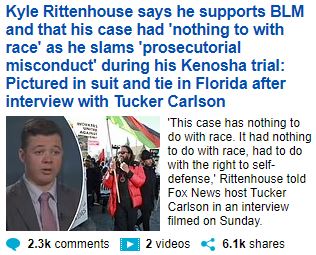 Many observers were quick to assume that Rittenhouse had gone trolling for BLM/Antifa types to shoot, that he was guilty of provoking them.

It is now coming out that Rittenhouse was exercising his First Amendment right to protest IN FAVOR OF BLM. He was attacked by people who he thought were his allies.

According to some accounts, Rittenhouse's attorney is a Democrat.

The judge, who was a total stud at keeping his courtroom under control in spite of constant challenges from the prosecutor, was appointed by a Democrat so we can make some assumptions about his leanings.

While there are a dozen ways you can slice this information, for me the most powerful insight is that a person's politics are not relevant if they do their darned job and stay out of my swim-lane.

Would I care about the politics of the person counting the votes if I had confidence that they were counting them fair-and-square? Nope.

Would I care about the politics of my surgeon if I knew he would discharge his duties to the best of his ability and escalate if things went pear-shaped? Nope.

Would I care what lever the preacher pushed in the voter's booth as long as the preached without bias from the Good Book? Nope.

We don't have a Liberal or a Conservative problem. We have a problem with Zealots who believe the rules do not apply to them and we have an even bigger problem with prosecutors and judges who actively avoid doing their jobs.