The most prosaic of topics 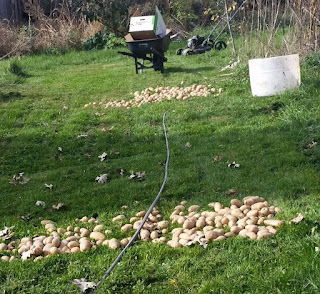 The ERJ spud harvest is in.
The results are underwhelming.
Six hundred feet of row (42" between rows) has the potential to produce 2100 pounds of potatoes.
We harvested about 500 pounds and it seemed even worse than that before I weighed a "40 pound" apple box filled with spuds. It weighed in at 58 pounds.
That 40 pounds is when even-sized apples are put in the box with dividers and cushions. I feel like a dolt. Even I should be able to pick up 58 pounds and realize that it is not 40 pounds.
The post-mortem identified three major issues:
The area penciled-in for potatoes next season is half the area so I better get my head in the game.
Medicinal herbs 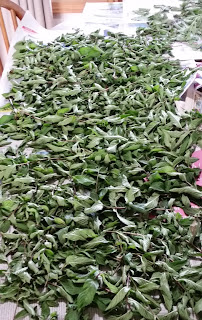 I love Mrs ERJ. She tolerates SO much.
I have spearmint and catnip drying on the dining room table.
Compared to most modern medicines (in modern settings), traditional herbal remedies are either relatively ineffective or don't offer large margins between therapeutic dosages and toxicity.
The focal plane shifts in austere environments. Sometimes the difference between death and survival is being able to coax a liter of liquid into the patient, and even better is liquid with a payload of water soluble vitamins.
Spearmint grows with wild abandon where our "crock" and sump-pump discharges. Catnip abundance varies from year-to-year but I may have to put my thumb on the scale to bias that abundance.
Hot chilis (peppers) are another folk remedy that is easy to grow. They thin the mucus and help sinuses and inner ears drain.

I am all ears if anybody wants to volunteer folk remedies that they consider worthwhile. 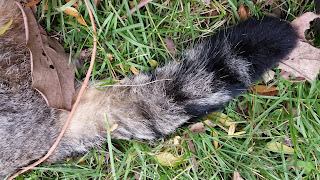 Belladonna informed me that we had a raccoon teasing the German Shepherds and getting into the garage.

My first few efforts to trap the animal proved it to be a wily beast. I was unable to catch it in a live trap. It stole the meat-baits and ignored the bananas and other fruity baits.

I escalated to a body-grip trap and used meat for bait. 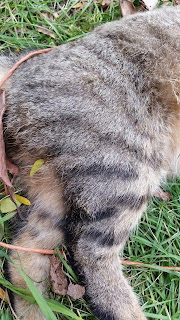 Belladonna's raccoon proved to be an enormous, male Felis catus with markings that strongly resembled those of a raccoon. Clearly a case of convergent evolution. 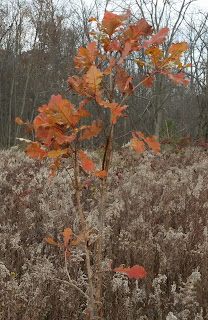