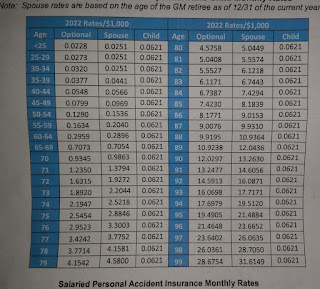 I received a letter yesterday that informed me that my term insurance rates will be going up in 2022.

That was expected. The Chinky-pox curfluffle raised mortality rates for a multitude of reasons. Increased mortality rates quickly translate to increased term insurance rates. Insurance companies are not in business to lose money.

Should your mind be of a certain bent and you have the skills, you might be tempted to chart the data. That is when something surprising pops. The data is fairly accurately represented by two straight-lines when the cost is plotted on a log scale.

Those of us who are younger than age seventy-five fall on the steeper curve while those of you fortunate enough to have survived more than seventy-five years are more accurately represented by a flatter curve.

Inverting it into a "what is your chance of dying (in a one-of-x chance format) between age 62-and-63" simplifies curve fitting facilitates curve fitting in terms of generating a mathematical representation. 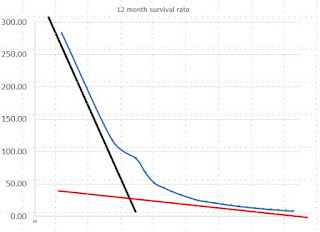 A tiny bit of magic leads us to the following mathematical representation of the survival rate curve driving the 2022 Term Life rates with age listed in years:

Mortality rate expressed in "One-in-X chance of dying in the next 12 months" with "X" shown on the vertical axis. Ages 60-to-89.

That suggests that most people who made significant, sub-optimal life-style choices (or chose their parents poorly) have been weeded out of the pool. Once you hit 75, the acceleration in mortality rate is HALF of that of the earlier period.

The mortality rate still accelerates. Lots of body parts are wearing out. But the pool is more-and-more dominated by sober, God-fearing little-old-ladies (and men) who have the endurance of rawhide and cellulite.

The grim reaper will always win in the end. But it is nice to know that he is out-of-breath and sweating like a race-horse by the time he drags some of us to the beyond.