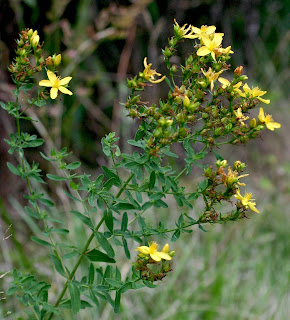 St John's Wort (aka Hypericum perforatum) is a plant that has been documented as having properties similar to Selective Serotonin Re-uptake Inhibitors used for the treatment of anxiety and depression.

Unfortunately, St John's Wort also comes with the drawbacks of the first generation SSRIs. For one thing, it takes several weeks before the brain chemistry stabilizes and full effects are in place. That makes dosing adjustments a slow process. Further, it means that the side-effects associated with starting a medicine (sleepiness, changes in appetite) are drawn out.

The reason I front-loaded the few herbs that have effect against depression and anxiety is that if things go sideways half of the population could be incapacitated by depression. People who were raised to be empathetic and "sensitive", people who are "traumatized" when they saw robins feed their nestlings earthworms will see actual humans die, sometimes in very ugly ways.

For the record, EPA (eicosapentaenoic acid), one of the Omega-3 oils found in fish oil has also been documented as being an anti-depressant. While oily, ocean fish might be difficult for most people to acquire linseed (flax seed) oil is rich in ALA another Omega-3 oil and about 10% of ALA is metabolized to EPA in the human body. So it is reasonable to assume that imbibing flax-seed oil MIGHT have antidepressant effects. Milled flax seeds are also an option but one must be mindful that linseed oil is perishable and very prone to oxidizing.

Point being, folks will have to make-do with what is available even if it is not considered a top-shelf drug in a modern, functioning, first-world country.

St John's Wort is available as seed or small plants from all of the usual suspects.