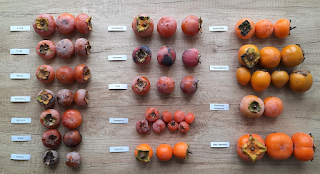 A friend sent me this photo. This photo was taken by a grower in the Ukraine who sent it to Cliff England. Mr England then shared it with other persimmon enthusiasts.

Cliff and his wife run a rare fruit-and-nut nursery in eastern-Kentucky. Persimmons are one of his specialties.

His part of eastern-Kentucky is nominally Zone 6 but they have measured temperatures as low as -17F which is knocking on the door of Zone 5a.

As a size reference, I grow the varieties shown on the left, second variety down, third variety down and third from the bottom. They are all pure American persimmon and the best fruit will be an honest 2" in diameter even when grown in Michigan...which is not the greatest place to grow persimmons.

I purchased scion from Cliff and he always throws in a few more than what I ordered if the scion is a bit short or crooked. They are great people to do business with. 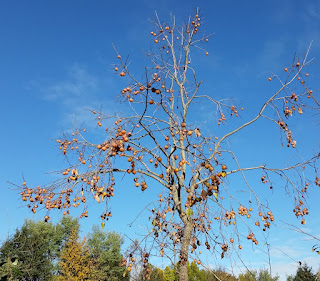 This is a bonus persimmon tree picture.

For a variety of reasons I am not able to capture how strikingly beautiful this tree is.

The weight of the fruit pulls the slender branches down almost like the boughs of a weeping willow.

The fruit has a luminous, three-dimensional glow to them.

In real-life, this tree is like a fantasy Christmas tree, dripping with fruit.

The only way I could get a picture of this tree without a bunch of clutter in the frame was to shoot it from down-low. That completely nukes the weeping willow aspect.

Things that may you go "Huh?"

I was pruning a GoldRush apple tree when I noticed some branches low in the tree that were grafted.

Being low in the tree they had not grown much but I could not remember ever grafting anything into that tree...so it could have been ten years ago.

One of the grafts still had a tag made from aluminum harvested from a Pabst Blue Ribbon beer can. Flattening it out, all I could make out were the letters

I am ashamed to share the first thing that popped into my mind. Try as I might, I could not find the last letter, whether it was a "B" or something else.

It took me a minute before I realized it was probably FUJI.