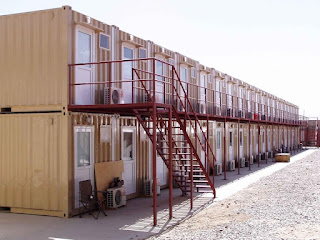 If the inability to return CONEX shipping containers (and other standardized containers) are part of what is constipating the free-flow of goods through the supply-chain, then it is possible that diverting a strategic number of them in a few, key choke-points could slick things up immensely.

"Authorities" proposed that a $100 fine for every 24 hours the containers are not moved as a potential solution. Since a new container costs less than $3k, the fines would be more than the value of the container in less than a month.

Those fines have been proposed in places like....Los Angeles.

Additionally, Los Angeles has been in the news for it discontented homeless people.

Has anybody proposed stacking a bunch of these containers for use as ad hoc housing?

I am glad you brought that up. They would make excellent jail cells, too.

Posted by Eaton Rapids Joe at 7:02 AM