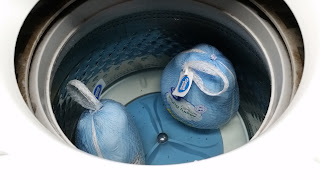 The day after Thanksgiving...

Mrs ERJ insisted that I wait until after Thanksgiving before buying turkeys to pressure can. She did not want Tiny Tim Cratchit's family to do without.

One store had turkey on sale for thirty-two cents a pound. It was forty-nine cents a pound if you did not have their "App". Limit of one turkey in either case.

A second store had turkey on sale for ninety-nine cents a pound.

Big-box-store had turkey on sale for eight-seven cents a pound. 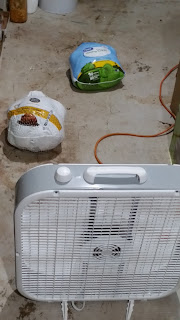 I ran an experiment. Two of the turkeys were placed on the floor of the root-cellar/pantry and a fan was started.

Another two turkeys were thawed by bobbing them in water. It was a bit of a challenge to find a clean container large enough to hold them but I managed. There are some details that are best not shared with my better-half.

The clear winner for ease was the pantry/fan method. Fifteen hours and the most frozen part of the 22 pound birds was soft-sherbet for hardness. The cold-water soak method was a pain in the behind and not as well thawed. Plus there was the risk of Mrs ERJ figuring out what I used for the container. 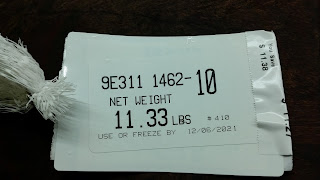 The smallest turkey, the forty-nine cents-a-pound one, weighed 11.3 pounds. I processed that one first and weighed the parts as I broke it down so I could estimate how many jars I would need.

The drumsticks weighed an ounce less for essentially the same fractional weight and percentage. Both wings and drumsticks went into the stock-pot. More on that later.

The neck and giblets weighed 0.9 pounds or 7.5%. They also ended up in the stock-pot.

The boned meat weighed 4.6 pounds or 41% of the purchased weight.

The bones with the scraps of meat went into the stock-pot.

If you do the math, eighty-seven cents a pound with a yield of 41% works out to $2.12 a pound, not counting the cost of labor. Not a huge bargain when you can buy boneless, skinless chicken breast for $2.20 a pound if you look for sales.

All that is irrelevant if you love turkey as much as Mrs ERJ.

The economy is in the stock-pot. I threw in the drum-sticks because it is a pain to cut the meat away from the pin-bones. If cooked long enough, and cooled, the pin-bones are easily stripped out.

I expect to get 40 points of pressure canned turkey out of the experiment. I also expect to get about 30 quarts (50% more by volume) of soup-stock.

I got much faster as I gained experience. I learned where to cut and how to lift and twist to disarticulate the joints.

I think I was three times faster by number five as I was for the first one.

Pressure canning is incredibly slow. One reason is because I only have one pressure canner. The other reason is that the directions say to let the pot cool by natural convection. That is a slow process. It is not uncommon for one batch to take four hours by-the-clock from jars first in the bath to being able to pull them out.

The primary reason for pressure canning is to produce temperatures high enough to inactivate Botulism and Perfringens (Clostridia) spores.

Another way to suppress them is either by lowering the pH. This is done with pickles and with summer-sausage (lactic acid). This is also a decent option for soup-stock as you can add some vinegar to each quart. I am not going to list an amount because I do not want to be held responsible for a bad outcome.

A third way to suppress them is by using "saltpetre". Nitrates/nitrites combine with proteins and mess Botulism et al up. This is used for ham, bacon, corned beef, hot dogs and cold-cuts. The nitrates/nitrites that combined with the proteins is what makes the cured meat that rosy pink. It has also been linked to increased cancers of the stomach and bowels.

I added a half-teaspoon of mustard seeds and a half of a bay leaf, then pressure canned as normal.

My goal is not to test whether pink salt suppresses Botulism but to see if the taste is acceptable.

The point is that I have at least five kettles that I can use for standard hot-water canning. I have turkey fryers and camp-stoves I can use for heat. In a pinch, I could increase my throughput by about 10X between the increased number of kettles and being relieved of the need to slowly cool the kettle while under pressure.