Playing with a new toy 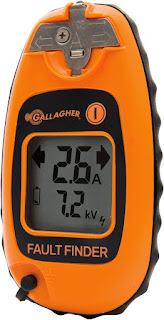 I purchased an electric fence tester and fiddled with it today. What a nice tool!

My only gripe so far is that I have to keep the unit warm to keep the 2032 battery happy.

Just goofing around I found a couple of issues. I am still baffled by a neutral wire that reads as having 300V which is weird.

Another puzzler was some poly baling twine that I had used to tie up a hot wire and it was conducting electricity. Maybe some moisture or bird-poop made it conductive? Distilled water is essentially non-conductive so maybe it was irons ions that washed out of the support.

That adds another maintenance item to my list of things to do; to cut all of the poly-twine supports and tie-in a real (ie, one that will not retain moisture) insulator. 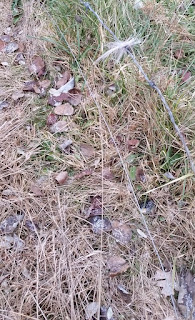 The wire on the ground was caused by a deer squeezing between the hot-wire (bottom) and a ground wire (with deer hair on it!!!). I assume the deer's timing was sub-optimal and it got poked by the fence. It took off like a top-fuel drag-racer and left hair on the fence and a wire on the ground.

I found myself needing some 35mm ID by 2mm CS, silicone rubber O-rings. I finally found some that were in nitrile. I also found some that I think are the right dimension that are used in breast-pumps. I ordered both and they will arrive within the week.

The other options were all shipping out of China and delivery times are on the order of a month.

I was supposed to run today but it is very windy outside AND it looks like I need two days of recovery between runs. My Plantar's Fascitis is flaring up and I need to get religion about stretching.

Southern Belle is working a few side gigs while she is up here.

That gives me the early morning shift with Quicksilver.