Some pictures from the garden

You know you are getting older when your excitement for the day is the arrival of new compression socks. Note to readers: Putting them on the blades of the ceiling fan is not a viable way to dry them more quickly.

I started the process of training the local raccoons. Over time, I have collected a goodly number of the rectangular, yellow buckets that kitty litter is (was?) sold in. They are ideal for a body-grip trap set. I put two of the buckets in places where I expect raccoon traffic and I laid them flat-side down rather than open-end up. Then I threw a handful of dried dog food into each bucket. I will do this for several day before I place a body-grip trap in the opening. I am using dog food on the advice of Delbert Toliver who used to hunt bears. He advised that no other bait was as convenient to use, as economical or as attractive to bears as "bargain, broken-bag" dried dog food.

I have this unshakable feeling that there are parallels between the operant conditioning I am exposing the raccoons to and what is being done to the new entitled classes.

More rain this morning so no tilling today. The weeds are tall enough that I should mow them before tilling. Otherwise they will bind up the tiller-blades.

Several weather systems have been running right over the top of northern Indiana and we are getting the proverbial crumbs that were brushed off the table from those systems.

The other thing I need to do is to replace the cord on the recoil starter. The last time somebody else used the tiller (as a favor to me) they yanked too hard and pulled the cord off the spool. It is not a hard fix but it is annoying that I need to do it. Breaking equipment is a poor way to demonstrate your "manliness".

The other garden news is that I planted my Chinese Cabbage seeds yesterday. This is a great time to plant beets and carrots and turnips many of the cabbagey kinds of plants. They are biennials. That is, the seeds germinate one year, the plant over-winters and then finishes maturing the next growing season. They are biologically programmed to pack-away the calories during the shortening days of fall so they can burst out of the ground like a jack-in-the-box the next spring.

Finally, I looked at some of my grafts. Rain really makes sluggish grafts "pop". It looks like I might strike-out on my Silk Hope mulberry grafts. One never broke dormancy. One grew three inches and then turned brown. The third graft is just hanging on. 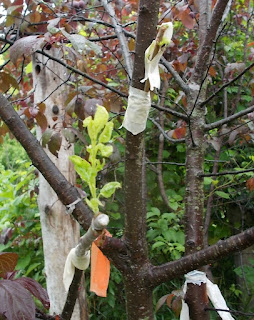 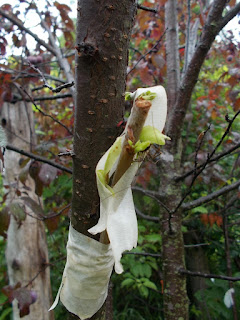 The AU Rosa (plum) grafts took and I am excited about that. I will trim away some of the branches that are shading them.

So far, no action on the pecan and hickory grafts.

The persimmon grafts look pretty good. The two I did earliest are farthest along. Of the six I did in some volunteer suckers in the garden, two look great, two look like they are pushing buds and two are giving me the finger.

The grape clusters are showing a lot of mildew this year. I anticipate that I will be culling some varieties and replacing them with more resistant cultivars. One pleasant surprise has been St Paul variety. So far, it has a very open vine which promotes rapid drying of clusters and the clusters are also very open with widely spaced berries. No mildew on any of the berries but that could just be an accident of low innoculum pressure. A few more years will be make-or-break as the canopy thickens up.

Posted by Eaton Rapids Joe at 9:57 AM