I get to drive Kubota to his job in Wyoming this morning. No, not the State of Wyoming. Wyoming the suburb of Grand Rapids. He needs to be there by 7:00.

I would lolly-gag on the way back and hit Bob's Gun Shop in Hastings but they open at 9:00 and I need to be back in Eaton Rapids to pull weeds in the garden.

Then I get my intake session for Physical Therapy about noon. I think I will take a couple of Tylenol an hour before going. I have no idea how many sessions a week the therapist will recommend. It could be as few as one if he thinks walking is the best exercise. I can walk almost anywhere and don't need special facilities.

Speaking of walking, the ever-lovely-and-charming Mrs ERJ wanted to go for a walk yesterday. Before my mishap, our usual walk was three miles and it took about an hour. Yesterday we walked a mile and it took 53 minutes. That was four minutes faster than the last time I walked a mile AND I walked half of it without a cane.

I have been enjoying the cartoon Rubes by Leigh Rubin. Hat-tip Lucas.

The cops in Uvalde, TX knew he was a threat, had the shot and did not take it.

The cops in Akron, OH knew he was a threat, had the shot and took it.

Both sets of cops are now vilified.

I expect the Akron rules-of-engagement to change. That was a butt-load of bullets going downrange and it seems improbable that every shooter was fully aware of what was behind the target. Or, other cops who might have shifted into the line-of-fire from cops who were shooting from farther back. 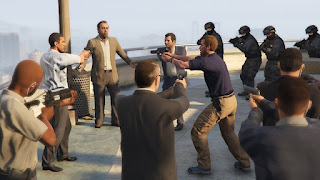 The actual hit-rate was incredibly high (especially for night shooting) which suggests that most of the shots were fired from close range. That raises the specter of the infamous circular firing squad.

I wonder if Akron was a suicide-by-cop?

Posted by Eaton Rapids Joe at 4:51 AM