Chernovsky had ample time to ponder the stupidity of what he was doing as he crammed his backside into the scant cover offered by the second observation point.

The cover on the roof had seemed more than ample when viewed from the first hide but after climbing up the side of the building had proved to be quite scanty.

Not only had the climb been harrowing and the cover almost non-existent, but he had punctured one of his gallon water jugs on the climb up. It was, of course, the full water jug and not the half full one.

Tormented by thirst in the unseasonably warm, late-September sun, Chernovsky had time to think about all the reasons HE should not be the one on this mission.

It had all seemed very simple and straight-forward when he told Straeder to take a hike. But now, relying on immobility more than cover he started thinking about the consequences if he were caught.

It is pretty tough to pass for an indigent drunk when you are three stories above the ground and had to work damned hard to get there.

Chernovsky had a high pain threshold but even he knew he would spill his guts if interrogators started shoving toothpicks under his fingernails or barbecuing his eyeballs with cigarettes. If caught, Chernovsky knew enough to make Capiche’s defense impossible.

That is when he decided that if he was “busted”, he was going to swan-dive to the ground.

Which made him think of Janelle and his unborn baby.

One of Chernovsky’s gifts wasthe ability to pare away the non-essential frills, stomp out the air bubbles and distill the "story" into the core problem. A problem well stated is a problem that is more than half solved.

The problem was to convince Livingston County that they had an imminent threat to their east. A threat large enough that the invasion of Capiche would have to wait until the eastern threat was resolved.

The night when Chernovsky torched Milford’s trucks and shot up Livingston County’s police post counted as one incident.

The third event had to be in the heart of Livingston County. It had to be more than a minor, border skirmish.

Chernovsky did not discover the leaking water jug until after he had eaten his pancakes. By four in the afternoon his torment led him to drink out of a puddle on the flat roof. Yes...he knew it had pigeon crap in it. He would deal with the fall-out later.

The regularity of the anomaly reminded Chernovsky of a beating heart.

Five nights later the Livingston County truck depot closest to Milford was engulfed in an enormous fire. All of the rolling stock was destroyed.

The next morning Torvalsen threw the breakers that opened the skylights and started the ventilation fans. It was still hot at mid-day enough that pulling in early morning air cooled the vast structure.

On the roof a wire that tapped into a 110V circuit energized a valve salvaged from a washing machine. With 85% of the population dead, there were plenty of appliances to salvage parts from. The valve opened and passed water down a hose into the thirty gallon fuel tank from a Ford F-150. 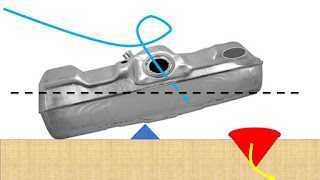 Beneath the hole was a funnel and hose. The hose directed the fuel into a squirrel-cage fan pumping air into a 5000 square-foot, high-bay area. The fan, driven by a 2 horse-power, 3-phase motor turned the steam of fuel into a fog that filled the enclosed space.

Chernovsky didn’t expect the fog to ignite. It would be enough if it LOOKED like an air-fuel bomb had been intended.

The spark occurred when Torvaldsen turned off the fans. The enclosed space was on the far side of the complex but the blast was enough to collapse a third of the building’s shell and trash the partition walls in half of what remained.

Chernovsky heard the blast from five miles away. He was working his way west toward Capiche. He could have made better time but he was hampered by a raging case of the johnny-trots.