Improvements to the hunting lease


Picture in your head a forty-acre hunting lease. Houses in the extreme southeast corner of image. The white rectangle near the top-center of the image is a pole barn.

According to the tracks, there is a huge amount of deer traffic in the southeast corner of the lease. The big draw is an orchard but the travel is also influenced by the cover to the east and south of the forty-acre lease. 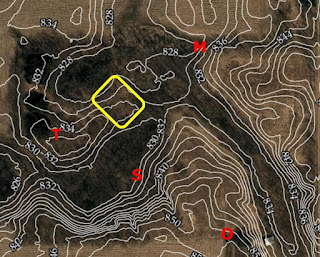 This image is of the north end of the lease. The pole barn is in the lower, right corner. Three stands are identified: T for Taj, M for Mack, S for Swamp and O for Orchard.

The proposal on the table is to plant an orchard in the location of the yellow diamond. The only major safety risk would be if T or M shot deer in the orchard. That would put other hunters downrange of the shot.

As currently planned, the 1/4 orchard will start with about a hundred trees and they will be thinned out as they crowd each other.

Another plan that is in the works is to put a 100 yard fence to divert some of the deer north of the pole barn. 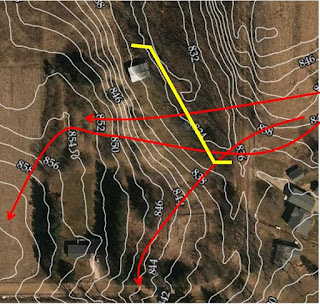 O is in the northwest corner of the orchard, immediately west of the pole barn on the 852 elevation line. Deer that spill around the north end of the yellow fence will be in the Orchard stand's prime shooting lane.

As a side-note: I got the second shot for Shingles and MMR today. The nurse advised that I should use ice if my shoulder becomes painful.

Seems like a waste of good whiskey, but who am I to argue with a trained professional.
Posted by Eaton Rapids Joe at 7:43 PM