The US Justice System is not perfect

She will be living at home for a bit as she stacks up some cash and plans her next move.

Bella and I were driving somewhere in the truck and to make conversation I asked her "If you could change anything, what would you change?"

She said "I would change the Criminal Justice System. It is broken."

Then I said "Can you be more specific?"

That is when she repeated the conventional wisdom "Blacks are incarcerated at five times the rate of white people. We have too many people in prison. Drugs shouldn't trigger automatic felonies...."

I was very proud of myself. I shut up and let her talk. It was hard.

I WANTED her to talk and arguing with her would make her shut up.

Part of what made it easy to shut up is that I can present my opinions here, on this blog.

Blacks are incarcerated at five times the rate of whites
Everybody says so. It must be true, right? 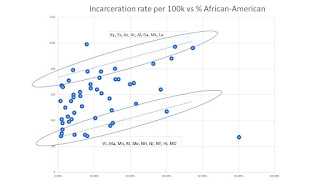 The image shown above are the fifty states plus the District of Columbia with the percentage of African-Americans along the horizontal axis and the rates of incarceration on the vertical axis. All numbers from Wikipedia.

The two extreme fliers are Oklahoma which is above the cloud and the District of Columbia below the cloud.

Two lines are sketched in at about the 90% confidence limits.

There is a story embedded within those two lines.

If one runs a regression between rates of incarceration (by state) and percent African-American, one gets a correlation of 0.30.  That is not very impressive in an industrial setting but people are soft and squishy. There is something there but it is not the entire issue.

Another story buried within the two lines is that there should be very few points close to those lines. And yet there are 20 states that are within kissing distance of those lines. That suggests a non-normal distribution. Perhaps a bimodal distribution.

Urban vs. Rural
Maybe it is a rural vs urban phenomena.

It is not an urban/rural phenomena

A regression analysis of the numbers from The Pew Charitable Trust and incarceration rates shows a correlation of -0.30.

A negative correlation means that they move like a teeter-totter, when one goes up the other goes down.

It makes sense, if one is on parole then one is in the community (working, making child support payments, becoming socialized) and not in prison.

If you perform a Tukey End Count comparing the states within the lower circle NH, Me, NY, Vt, Ma are above even the first state from the "high incarceration"  group. Counted from the other end, another count is added before a "low incarceration state" is listed from the rank-ordered list of "Community Supervised". That gives a Tukey End Count of six which suggests with 95% confidence that "Community Supervision" is a player.

This is about as far as I can beat this topic on my own.

I know there are some readers out there who work in Corrections. I invite you to make the rest of us smarter. What do we not know about "Community Supervision" that we should know?

Note to readers: I will add links if anybody responds or suggests books or essays to read. For example, it would be nice to know if parole and/or bail are granted more readily to men with families (wife) in the area because they are less of a flight risk, then one can assume a relationship between out-of-wedlock births and increased lengths of incarceration. Stuff like that.
Posted by Eaton Rapids Joe at 6:44 PM