Chernovsky tried casting some slugs from his stash of lead. He had a picture of him using a sling. If David could kill Goliath with a sling, what could Goliath do?

His first efforts involved blowing the insides of four chicken eggs out into a pan...which he cooked and ate for breakfast. Then he enlarged the hole on the small end and poured dry sand around the four eggs. He melted some of his stash of wheel weights and poured them into the eggs.

Once they cooled, he hefted them. They weighed almost a pound each. That was about four times heavier than he wanted.

Over the course of his trading he picked up some pill bottles that were 5/4” in diameter. Pushed an inch into the sand, they made cylindrical depressions of about the right dimensions. He made about twenty of them.

Then he set about making a sling.

He spent a great deal of sweat rewriting the work instructions for auditing the pick-face.

Joel emailed the changed work instructions to everybody in his chain of command. Richards did not read it. Thorvaldsen did read it. If Thorvaldsen thought the emphasis on the south pick-face was unusual, he gave no indication.

The email system sent return-receipts. The in-baskets of all receipients accepted the email.

Joel’s quick reviews of the odometer readings of the two big trucks indicated that the delivery sites varied but the drivers generally added between forty and sixty miles every night.

There was no evidence of extravagant diesel usage, so the drivers must have been fueling up off-site.

Watching the coffee consumption and who took naps indicated that eight employees were likely involved in the theft. One day, four of the men would be tired. The next day four different men would be dragging-ass. The third day it would be the first four men.

The land east of the Grand River was sparsely populated. The Plague had hit it hard.

Low population meant there were fewer people to trade with. Pickings were slim.

Chernovsky wanted to hurry up.

Straeder wanted to slow down.

It took the peddlers four days to cross Ingham County.

The geology of Ingham County, the county that separated Livingston County and Eaton County, is sufficiently unique to merit mention.

The glaciers that covered Michigan at various times dropped extravagant amounts of fill on top of Ingham County’s bedrock.

Later glaciers pushed down from the north and created a gentle north-to-south upgrade. During the summers, the surface of the glaciers melted and rivers formed, cutting through the glaciers. The beds of those rivers, suspended in the ice sheet, formed gravel eskers that oriented north-south approximately every five miles, like so many teeth on a comb.

As the climate staggered toward a warmer period, a minor cold spell resulted in the glacier pulsing once more south. The southern extreme of that pulse was just slightly north of Ingham Counties northern boundary. The debris pushed by that glacier formed a prominent “moraine”, just like the earth pushed by a bulldozer blade. A river, later named the Red Cedar, flowed just south of the moraine pushed up by that later, southward thrust.

The first major stream the peddlers encountered was Sycamore Creek. The second major stream was Doan Creek and the last one they encountered just before they left Ingham County was the West Branch of the Red Cedar River. 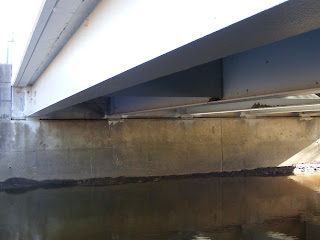 The bridges across Doan Creek  were supported by forty foot long, steel I-beams that were 15” tall and 6" wide. The seven beams were spaced on six foot centers and the spans varied from four feet to an honest eight feet above the streambed.

Neither the massive concrete beams, nor the widely spaced I-beams would be easy to demo with the meager amounts of low quality explosives at Capiche’s disposal. 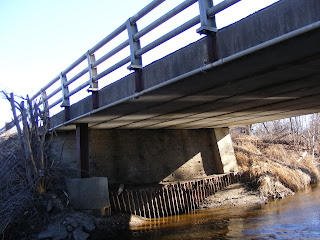 The bridges across the West Branch, on the other hand, were shallow, pre-stressed concrete beams. Given the apparent age and the 12" depth of the beams, the bridges were extremely vulnerable, the only exceptions being the bridges that supported the east and westbound lanes of I-96.